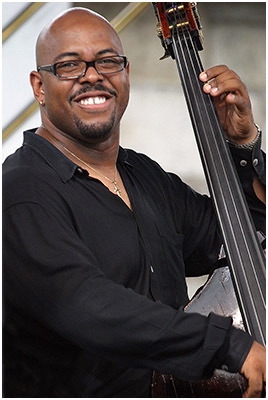 slideshow
Has the dreadful winter of 2014 finally released its icy grip on the St. Louis area? We can only hope so, because there's a lot of interesting jazz and creative music to hear around town over the next few days. Let's go to the highlights...

Tonight, bassist Christian McBride begins a four-night stand at Jazz at the Bistro, this time with the latest iteration of his trio, featuring drummer Ulysses Owens, Jr. and the up-and-coming pianist Christian Sands.

Their first album together, Out Here, was released last August as McBride's fifth recording for Mack Avenue Records. With a sound firmly “in the tradition," it's gotten generally positive reviews, as has their live show, which the New York Times' Ben Ratliff called “constant sleek fun, organized and coordinated."

Tomorrow night, actor/singer Ken Page, a St. Louis native who starred in the original companies of Ain't Misbehavin', Cats, and other Broadway hits, opens the Gaslight Cabaret Festival with the first of two performances of his show “Old, New, Borrowed & Blue" at the Gaslight Theater. The festival continues through April 26, and you can hear more about that and Page's show during this interview he did last week with KWMU's “Cityscape" program.

Also on Thursday night, the Rainbow Band, a quartet with guitarists William Lenihan and Vincent Varvel, bassist Eric Stiller, and drummer Steve Davis, will play a free concert for Jazz at Holmes series at Washington University.

On Friday, vibraphonist Peter Schlamb leads a trio at Robbie's House of Jazz; keyboardist Matt Villinger brings his group to The Engine Room; Second Generation Swing plays for dancers at Casa Loma Ballroom; Sarah Jane and the Blue Notes will perform at CJ Muggs in Webster Groves; and pianist Peter Schankman will present a trio concert at the Kranzberg Arts Center.

On Saturday, New Music Circle will present multi-instrumentalist Joshua Abrams’ Natural Information Society at Joe’s Cafe, 6014 Kingsbury Ave. in the Central West End. As a bassist, Abrams is a mainstay of Chicago's improvised music scene, but the Natural Information Society is something a bit different, as it's built around his work on the guimbri, a three-string acoustic bass from west Africa.

The band's lineup for this concert will include drummers Frank Rosaly and Mikel Avery, Emmett Kelly on electric guitar, Ben Boye on autoharp and Lisa Alvarado on harmonium. For more about Abrams and some video footage of the band in action, check out this post from last Saturday. Abrams also was interviewed for a preview story by St. Louis magazine's Stef Russell, and the show even is the subject of a full-page cartoon in this month's issue of Eleven magazine.

Also on Saturday, the Gaslight Cabaret Festival continues with St. Louis' own Tim Schall performing his show “1961" at the Gaslight Theater; singer Feyza Eren and pianist Scott Sheperd will duet at The Wine Press; saxophonist Mike Fitzgerald returns to Jazz On Broadway; and the Funky Butt Brass Band headlines an evening of funk at The Gramophone

On Sunday, the Coleman-Hughes Project will play smooth jazz, R&B, and more at Nathalie's; and the Dave Dickey Big Band will be back for their monthly gig at Kirkwood Station Brewing Company.

Looking beyond the weekend, on Monday faculty members from Webster University will join together as the Webster Jazz Collective for a concert at  Winifred Moore Auditorium on the main campus in Webster Groves; and saxophonist “Blind" Willie Dineen and the Broadway Collective will return to BB's Jazz, Blues and Soups.