Jazz Standard will soon become THE spot to be on Tuesdays! --Maurice "Mobetta" Brown 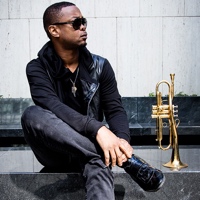 12 years after giving Maurice Brown his debut as a leader, Jazz Standard is thrilled to be welcoming him back to its stage.

“Maurice has charted his own musical path,” said Seth Abramson, artistic director for Jazz Standard. “We are honored to provide him with the space to continue exploring and expanding all musical boundaries. Audiences will love his infectious energy and outstanding bandmates, inclusive of multiple genres and styles. Tuesday nights will never be the same!”

Each weekly show will be based on a different theme featuring a new and exciting all-star line-up. “This is a great opportunity to unite musicians that never would have performed together otherwise,” said Maurice. “I look forward to premiering some new repertoire, getting inspired by my fellow bandmates, and letting loose. Jazz Standard will soon become THE spot to be on Tuesdays!”

The excitement kick-starts March 14th with the exclusive live release of Maurice’s album The Mood. This engagement will feature Chelsea Baratz (tenor sax), Chad Selph (keyboards), Antoine Katz (bass), Marcus Machado (guitar), and Joe Blaxx (drums). Maurice describes The Mood as “picking up the listener and taking them on a journey, transporting them to an entirely new place with each song, exploring moods and feelings that words cannot adequately express on their own. Each song is a vignette of a moment in life & has been captured into a soundtrack. This music reflects my American roots in black music while reflecting the musical influences of my world travels.”

From sonic brass to rock n’ roll to hip-hop, Maurice’s intuitive vision lights a fire under traditional jazz. His staggering, original sound pushes the production edge in hip-hop and R&B to new creative heights. Maurice has balanced a tightly packed schedule working with everyone from The Roots, Aretha Franklin, and Wyclef Jean to the Tedeschi-Trucks Band. As a performer, he “has emerged as one of the most dynamic trumpet soloists of the under-30 generation—in New Orleans, Chicago, New York or anywhere else,” (Chicago Tribune). According to Marcus Miller, “hearing Maurice Brown play let's me know that jazz is in good hands going forward."

Maurice “Mobetta” Brown’s talent orbits him simultaneously through three worlds: contemporary jazz, blues-rock and cutting edge hip hop. He’s a mastermind as a trumpeter, composer, arranger, and producer. When Maurice picks up his horn, his soulful melodies soar into a rarefied space that uniquely marries be-bop to hip-hop and rock, producing his own distinctive sound.

Brown displayed an affinity for the trumpet at a young age as he won the national Miles Davis Trumpet Competition and studied under legendary clarinetist Alvin Batiste. His critically acclaimed debut album “HIP TO BOP”, recorded in New Orleans, foreshadowed Brown’s unique talent for creating fresh bop-inflected jazz. Yet, Hurricane Katrina’s devastation didn’t spare Maurice and he took his talent to Brooklyn.

Maurice reformed his own quintet, resurrected his underground hip-hop/funk combo, Soul'd U Outand recorded with Aretha Franklin, Wyclef Jean, De La Soul, Macy Gray, Dr. Lonnie Smith, Lettuce and The Roots. His follow-up album, The Cycle Of Love garnered significant praise; Huffington Post and NPR named it one of the best records of the year. Brown further embraced his be-bop roots with hip-hop hooks; it also lays raw his dogged insistence on charting his own musical course, bred by the rare success of his debut album and a life uprooted post-Katrina. Maurice was invited to join the newly formed Tedeschi-Trucks Band. He created the horn arrangements on TTB’s debut album, Revelator which won a 2012 Grammy for Best Blues Album. Brown’s trumpet was a wailing counterpoint to Derek Truck’s searing guitar wizardry.

Brown’s immersion into hip hop as musician/MC/producer culminated in the 2014 release of Maurice vs. Mobetta (Brown Records). This groundbreaking alter-ego album remixed original horn parts with newly recorded hip hop beats. Brown’s jazz roots are cultivated here through the lens of a hip hop perspective. Talib Kweli, Prodigy and Jean Grae’s spitting rhymes are met by Mobetta’s own, while his trumpet circles muscularly throughout every track.

Constant evolution drives him. His intuitive vision lights a fire under traditional jazz, adds sonic brass to rock n' roll and pushes the production tip in hip-hop. Having recently severed ties with TTB, Maurice “Mobetta” Brown is again charting his own musical path. The years release of album tracks he produced for Talib Kweli, Omar, and Prodigy will make 2017 a long, hot burn. His new album, The Mood is set to be released March 10, 2017. (Mobetta Music)