Jazz-Rock Keyboardist Brian Auger To Embark On A Spring Tour

I love performing in front of live audiences; there is always a great vibe that energizes me.
&#151Brian Auger 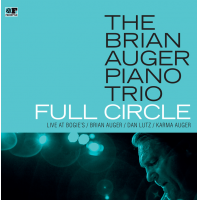 “I love performing in front of live audiences; there is always a great vibe that energizes me," said Auger ahead of the tour, which will also take him to Toronto, Cleveland, OH, and other cities.

Details of his upcoming concerts, organized by New York-based In Touch Entertainment, can be found at here.

As a young musician in the mid-1960s, Auger founded the British blues band, The Steampocket, later following with other ensembles, including Trinity and Oblivion Express.

During his illustrious, 60-year career, Auger performed with some of the most iconic musicians, including Rod Stewart, Jimi Hendrix, John McLaughlin, and Led Zeppelin; his music has been played by Mos Def, Common, and Richard "Groove" Holmes, among others.

Legendary jazz musician Herbie Hancock called Auger “one of the best B-3 artists I have ever heard in my life." The B-3 refers to the type of the Hammond electric organ that Auger performs on.

Following previous anthologies like Oblivion Express and Back to the Beginning, Auger, who received the US Congressional Award for Services of Jazz, has released his new, critically-acclaimed album, Full Circle – The Brian Auger Trio – Live at Bogie's, in the fall of last year.

Calling the new Freestyle Records release, “an excellent album," Aja Ketch of A Vibe Radio Show said Auger “has not lost any of that original dynamic free soul."

And Shindig Magazine said that Full Circle is “the uncluttered, pared-down sound of Brian Auger rolling back the years and revisiting his roots on a set list of standards and evergreens."