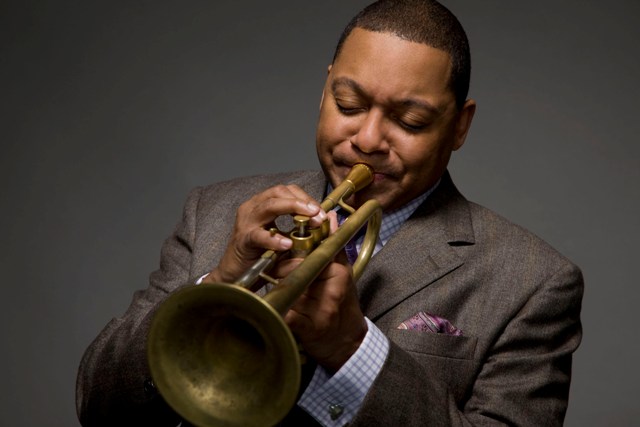 In the summer of 2008 multiple Grammy award winning jazz artist Wynton Marsalis and his quintet teamed-up with French accordionist Richard Galliano at the annual Jazz in Marciac festival in southern France to pay tribute to the late jazz legends Billie Holiday and Edith Piaf.

The result is a live recording (CD/DVD deluxe combination) that captures this magical performance by two modern legends. The album, entitled The Wynton Marsalis Quintet & Richard Galliano From Billie Holiday to Edith Piaf: Live in Marciac offers the listener a 9- song set that translates classic jazz vocal compositions into artful instrumental versions that are striking in their rhythmic variety.

From the dizzying waltz tempo of “La Foule" to the infectious swing of “Them There Eyes" to the haunting performance of “Strange Fruit," the concert has been faithfully captured in sound as well as in video through a special bonus DVD.

Richard Galliano is a renowned French-born accordionist who has collaborated with musicians including Chet Baker, Ron Carter and Charlie Haden. Hailed as an extremely versatile musician who is able to masterfully navigate many musical contexts and genres, Galliano is the recipient of the prestigious Academie du Jazz Django Reinhardt Prize awarded annually to the best French musician.

Marsalis will release four-exclusive video clips from the deluxe version DVD on his personal Facebook and YouTube page and official website, wyntonmarsalis.com beginning June 1st. The “La Foule" video clip is the first of a four-week series of exclusive video clips leading up to the album's release. Visit Facebook.com/WyntonMarsalis to view the videos.


Pre-order now at Amazon.com, and in select retail stores and iTunes on June 22nd