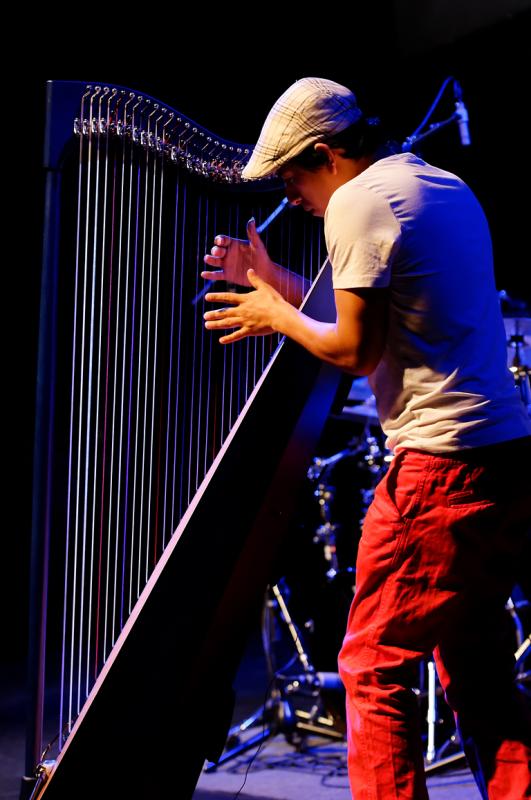 slideshow
The harp is not without precedent in jazz but it’s unlikely anyone has ever played the harp quite like Colombian harpist Edmar Castaneda. Irish audiences are in for a special treat when Castaneda embarks on a six-date tour of the country between 20th and 27th October, culminating in a performance at the Guinness Cork Jazz Festival.

The harpist’s 2006 debut recording Cuartos de Colores fused folkloric elements typically associated with the arpa llanera from Venezuela and Colombia with jazz, but his palette revealed many more influences. African and Brazilian rhythms, tango and flamenco are as much part of Castaneda’s idiom, as is the music of alto saxophonist Charlie Parker and pianist Chick Corea.

“It’s not like nobody’s ever played jazz harp,” says drummer Ari Hoenig, “but I haven’t heard anybody doing what Edmar’s doing as good as that. He’s the best that I’ve heard.” Listening to Castaneda combine intricate, bop-inspired finger-picking and independent, grooving bass lines rooted in the Afro-Cuban tradition with dramatic, percussive chords, it’s easy to see why so many people are dazzled – his sound is orchestral in scope.

Castaneda has led a trio with trombonist Marshall Gilkes and drummer/percussionist David Silliman for the guts of a decade but this six-date Irish tour affords a rare opportunity for Irish audiences to see the Colombian phenomenon in a solo context. To see Castaneda manage the melodic, harmonic and rhythmic duties solo, improvising to boot, is really something to behold. These are concerts not to be missed.