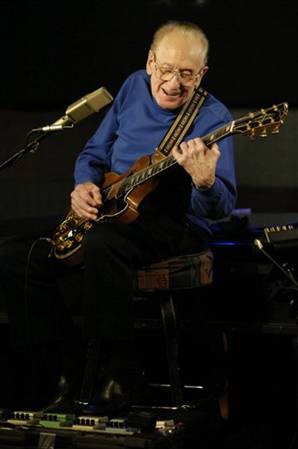 slideshow
Today, in New York, at White Plains Hospital, guitar legend, Les Paul died of complications from pneumonia. He was 94 years old. Aside from having what any of us would consider to be a good run in the longevity department, Les Paul also realized great quality of life achievements within the quantity of his years. Since the birth of rock and roll, every kid with a dream wanted to own a Gibson Les Paul guitar; the six-string electric named for its creator, and has been in production by Gibson Guitars since 1952. His influence on the music world is enormously vast.

More importantly, though, Paul should be remembered for other accomplishments as well. He was a great inventor, a pioneer of amplification, multi-track recording, overdubbing, and fashioner of a multitude of guitar gadgetry. Paul was even inducted into the National Inventors Hall of Fame in 2005. With his wife, Mary Ford, Paul racked up at least 36 gold records during the late Forties, the entire decade of the Fifties and the early years of the Sixties. What makes these achievements all even more impressive is that he did most of these things with a noticeable physical limitation. Driving through Oklahoma, in 1948, Paul survived a horrible car crash that left his right arm so mangled and crushed that, initially, the doctors considered amputation. Luckily, a progressive surgeon reconstructed the arm and put it in a cast at a just under a 90-degree angle, pointing at Paul's navel. Pins in his elbow set the arm permanently in this position. A career as a yoga master was certainly beyond consideration, but at least Paul could still play the guitar. It appeared to be a fascinatingly eerie compromise. Continuing to live life to the fullest, Paul claimed to have, at one point, been a five pack a day cigarette smoker. He also suffered a stroke, a broken eardrum, Meniere's disease and acute arthritis that darned near crippled his hands. Additionally, Paul began, not surprisingly, having heart problems in the 1970s. In 1980, he underwent a quintuple bypass operation, which was said to be one of the first of this kind.