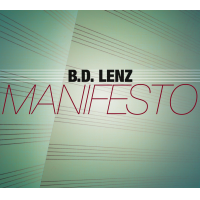 With thousands of live gigs performed internationally, 8 highly-acclaimed albums and hundreds of his songs featured in TV shows globally over the past 20 years, B.D. Lenz is celebrating his 20th anniversary with the release of his 9th new album of Jazz music at a CD release party on March 25, 2016 at the legendary The Stanhope House in New Jersey.

Lenz, an international guitarist, composer and band leader began playing guitar at the age of 14. Discovering jazz later in life, he formed his first Jazz band and began writing in 1996. Getting back to his roots while showcasing the tremendous growth he's had over the past 20 years, B.D. Lenz ninth recording titled Manifesto, due to officially release on March 25, 2016, fuses traditional jazz style playing along with a cutting edge fusion style: Think Stevie Ray Vaughn meets Pat Metheny. The music is the vision of Lenz to create an unparalleled listening experience for jazz lovers and jazz guitarists. Taking several years to write, Lenz says, “I spent a long time writing and rewriting “Manifesto" and I agonized over every detail of these tunes. It's a culmination of my entire career worth of learning."

Taking a different approach than he ever had before, Lenz reached out to his fans asking them to join him in the recording process. Using a Kickstarter campaign, Lenz says he was surprised at how much his fans wanted to be involved. Lenz says, “People I never imagined kicked in, including a very generous donation of $1,200 from a restaurant owner where I used to play. I was surprised that people would contribute like they did." Lenz, using his vast knowledge from his previous recording sessions was able to keep the costs down and at the same time, the campaign allowed him the ability to make the album the way he wanted.

Lenz will play three sets at the Manifesto Release Party on March 25, 2016 at The Stanhope House.

Mix together the styles of Pat Metheny, Mike Stern, and Stevie Ray Vaughn and you have the recipe for contempo-jazz guitarist B.D. Lenz = 1046. The New Jersey native has played guitar since his early teens, is a graduate of Musicians Institute in Los Angeles, and has studied with such masters as Mike Stern, Vic Juris, and Charlie Banacos along the way. Lenz has released 9 highly-acclaimed recordings as a leader featuring greats such as Randy Brecker, Will Lee, Joel Rosenblatt, & Mark Egan and his music has been featured in hundreds of TV shows globally including “Breaking Bad" (AMC), “Catfish" (MTV), and “Anthony Bourdain's No Reservations" (Travel Channel) to name a few. This Godin-endorsed guitarist has performed thousands of shows internationally, keeping the audience on their feet whether playing jazz, fusion, or jam.