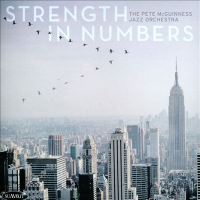 Acclaimed jazz composer/arranger, trombonist and vocalist Pete McGuinness has earned two 2015 Grammy nominations for arrangements on his Summit Records CD Strength In Numbers. The nominations are for “Best Arrangement Instrumental or A Cappella” for his arrangement of “Beautiful Dreamer” and “Best Arrangement, Instruments and Vocals” for his arrangment of “What Are You Doing The Rest of Your Life.” The Grammy Awards ceremony will take place in Los Angeles on Sunday, February 8, 2015.

Strength In Numbers is the second release from the Pete McGuinness Jazz Orchestra and the fourth as a leader for Pete. Featuring a full contingent of top tier NYC players, the CD has earned wide critical acclaim.

“McGuinness has managed to produce an album that should appeal to those who savor music that is shrewd and sophisticated as well as to others who lean toward buoyancy and power." —Jack Bowers, All About Jazz

“4.5 stars. On its 2007 Summit debut, the Pete McGuinness Jazz Orchestra showed a portentious range of orchestral vocabulary and instrumental facility. That promise has developed and deepened on this release. The band continues display ensemble and solo maturity on superb arrangements and it’s significant that most of the participants are back for this outing. Equally impressive is how trombonist/composer Pete McGuinness uses compositional variety to tell a story…. Without recreating an era or bowing to earlier models, the Pete McGuinness Jazz Orchestra deftly utilizes what came before to show what is possible in the present.” —Kirk Silsbee, DownBeat

“A solid, tasteful big-band album arranged by McGuinness, whose writing throughout wriggles the orchestra in and out of compelling places. The combination of flutes and bass clarinet and gorgeous trombones that sound like French horns makes for a big-band recording with a delicate, bold sound.” —Marc Myers, JazzWax

“This New York based large ensemble plays with heart and finesse… Many of the arrangements have an airy quality about them and tend to build slowly to majestic crescendos.” —Mark Holston, Jazziz

Pete McGuinness has appeared on over forty recordings, including three previous releases as a leader: First Flight (Summit) with the Pete McGuinness Jazz Orchestra which earned 4-stars in DownBeat, Voice Like a Horn (Summit) and Sliding In (Kokopelli). He earned a 2008 Grammy nomination for his arrangement of “Smile” (which appeared on First Flight) and was the first prizewinner of the 2010 Jazzmobile Vocal Competition (judged by the late Dr. Billy Taylor and Barry Harris). A New York resident since 1987, McGuinness studied with Bob Brookmeyer and Manny Albam at the prestigious BMI Jazz Composers Workshop and has performed in the big bands of such acclaimed leaders as Lionel Hampton, Jimmy Heath (featured as a vocalist as well) and Maria Schneider, appearing on her Grammy-winning album, Concert In the Garden. Actively involved in music education both throughout the United States and Europe, McGuinness is currently the Assistant Professor of Jazz Arranging at William Paterson University.