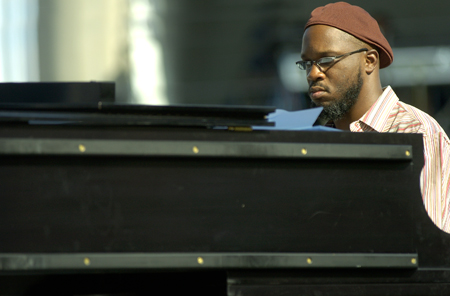 slideshow
Opening a new Jazz Bridge Neighborhood Concerts series called Jazz at the Playhouse, pianist Orrin Evans will be appearing at the Society Hill Playhouse, 507 S. 8th Street in Philadelphia on October 20th, 2011 and with him will be bassist Alexander Claffy, drummer Justin Faulkner, and saxophonist Chelsea Baratz. One Show: 7:30-9 p.m. Admission: $10/$5 for students. No advance sales. For info: 215-517-8337 or 856-858-8914. Parking is right across the street.

Please note that after this initial performance by Mr. Evans, he will be hosting the rest of the series that he musically curated for this season every third Thursday of the month through May. For a complete lineup, visit Jazz Bridge.

Jazz Bridge, a 501C3 nonprofit that assists our local jazz and blues musicians in crisis, is sponsoring this concert.

Born in Trenton, NJ, but raised in Philadelphia, pianist Orrin Evans was among the “Young Lions" of straight-ahead jazz who emerged in the 1990s. “The clear-cut best pianist of his time..." is how Hot House Magazine described Orrin Evans in 1998, praise which was echoed again in the summer of 2002. His remarkable talent was nurtured in a household filled with music and he learned from what he heard.The New York Times described him as ..."a poised artist with an impressive template of ideas at his command," a quality undoubtedly recognized by the legendary saxophonist Bobby Watson who engaged Evans as piano chair for his band, a position he held for six years. Orrin has recorded with Bobby on Live and Learn, Quite as it's Kept, which features Evans' composition “Looking in Your Eyes." Bobby also recorded another of Orrin's compositions “Two Stepping with Dawn" on Bobby Watson & Curtis Lundy Project on Sound Hills Records. Orrin has been a mainstay with the Charles Mingus Big Band, formed and recorded his own big band (The Captain Black Big Band, which received a glowing review from Ben Ratliff of the New York Times when the band appeared at Irridium in New York City), and has toured the world with such diverse talents as the evolutionary Wallace Roney, Stefon Harris, and Antonio Hart. Besides touring and recording, Evans is also a teacher and musical commentator, having conducted workshops, clinics and master classes. Orrin Evans is a recent Pew grant recipient, and his latest CD Freedom has been getting rave reviews.