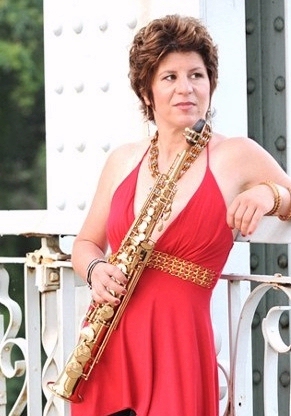 slideshow
Appearing on Wednesday, May 2nd at the Kennett Flash, 102 Sycamore Alley, Kennett Square, PA, for the last concert of this season will be saxophonist Lynn Riley & The World Mix and her band World Mix. Showtime: 7:30 p.m. One show. $10/$5 students. No advance sales. For info: Call 484-732-8295.

This concert is produced by Jazz Bridge, a nonprofit that assists jazz and blues musicians in crisis who work and live in the Greater Philadelphia Metro area.

Lynn Riley & The World Mix has performed with many great artists like Grover Washington Jr., Philly Joe Jones, David Bromberg, Rachelle Farrell, Charles Earland, Gerald Veasley, David Murray and Johnny Pacheco, as well as leading her own groups. She has performed at the Painted Bride Arts Center for their series Women Leaders in Jazz and opened for artists such as Najee, Spyro Gyra, Nelson Rangell, Nester Torres, Andy Narell, the Indigo Girls, Brenda K Star, the Mahotella Queens and Compai Segundo of the Buena Vista Club. She has performed throughout the United States, as well as in Europe, Africa, South America and the Caribbean, touring with diverse groups such as Sharon Katz and the Peace Train (the South African band that rocks), Ellas y Amigos (Funky Caribbean Latin Jazz) and FVC (Motown to Miles), introducing new audiences to Lynn's playing and gaining her enthusiastic fans worldwide. More recently Lynn has been expanding her composing vocabulary and style by traveling and performing in countries such as Cuba, South Africa, Bolivia and Brazil. This multicultural exposure gives Riley's music a unique traditional ethnic sound blended with her original ideas and jazz roots, culminating in a funky accessible world-influenced mix. She has received a Window of Opportunity grant from the Leeway Foundation and an award by the Trane Stop Resource Institute for her contributions in preserving and promoting Afro-American music. Lynn has been on the faculty of the Performing Arts Department of Drexel University since 1998 and was an Artist in Residence for Opera Seabrook's 2008-09 season. Collaboration with long time friend and co-band member Rubin Edwards has generated many magical musical moments, from riveting live performances to beautiful compositions to production of Lynn's new album Too Cool.