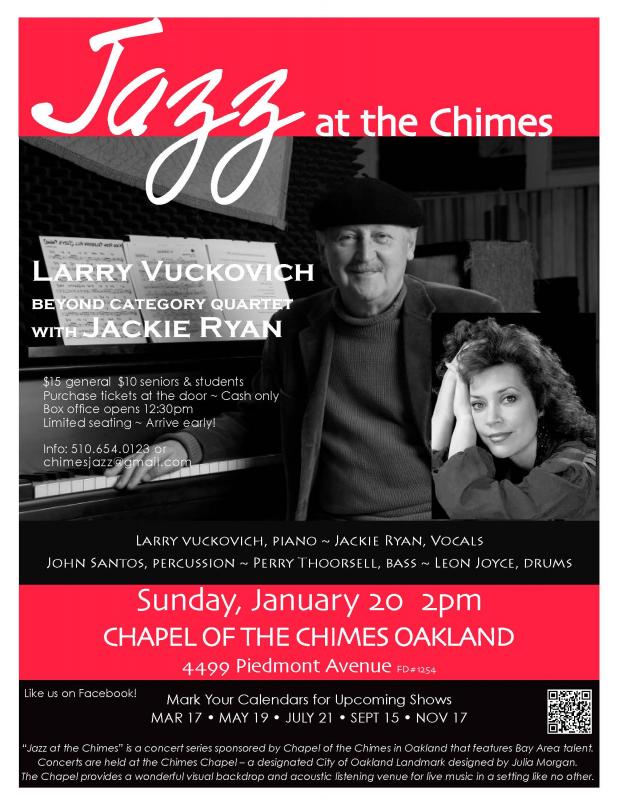 slideshow
JAZZ AT THE CHIMES’ kicks off its 2013 season with Bay Area jazz luminaries Larry Vuckovich, Jackie Ryan and John Santos — Sunday, January 20, 2012 at 2:00 pm at Chapel of the Chimes, 4499 Piedmont Avenue, Oakland.

At this concert, listeners will be treated to an array of musical selections from Vuckovich’s eclectic repertoire. “I call my group Beyond Category because we play music that embraces swinging bebop, contemporary jazz, modal/on-the-edge/Balkan-Middle Eastern-Roma (gypsy) ethnic fusion, flamenco, Afro-Cuban, Brazilian, down-home blues and jazz tango,” said Vuckovich.

Vuckovich’s quartet will also accompany the gifted vocalist Jackie Ryan who moves audiences with her 3 ½ - octave range and warm stage presence. She will be singing tunes featured on her new CD “Listen Here,” which will be released on January 15. Concertgoers will hear selections ranging from blues & gospel, to luscious love songs, perhaps a Spanish ballad or a Gershwin tune.

Larry Vuckovich has won acclaim from critics and jazz audiences for his deeply imaginative style and repertoire heard at prestigious North American and European jazz clubs, concert halls and festivals. He is equally at home in world music/classically influenced modal jazz as he is with hard-swinging bebop, post-bop, contemporary jazz, and down-home blues. The New York Times notes that his unique outlook and collection of influences “set him apart from most pianists who are heard regularly in New York”. The Village Voice comments on his “book of piano gems that will keep you guessing.” The Toronto Globe and Mail calls him “a musician who sits apart from the rest by virtue...of his taste for both the exotic and the exquisite.”

Cited by piano legend Barry Harris as “one of the premier West Coast pianists, Mr. Vuckovich brought his Jazz-Latin Trio/Quartet, featured on his two current piano trio/quartet CDs, to Lincoln Center’s Dizzy’s Club in New York on a recent East Coast tour. On the same tour, he performed with Marian McPartland on her Piano Jazz show, broadcast to national and global NPR affiliates.

His current CD release, “Somethin’ Special,” has done well on the jazz charts, remaining there seven months after its release and reaching the No. 3 spot twice and staying in the top five for a whole month. Vuckovich says, “I particularly feel good about this, especially at 75.”

“He’s a passionate exponent of what most people call straight-ahead jazz ... there is a consistently tasteful quality to his music that makes it very appealing to the ear. “ —Leonard Maltin

“... a pianist whose evocative touch and poetic (but unsentimental) sensibility convey the wisdom of deep musical life experience" —Thomas Conrad

Jackie Ryan has sung all over the world from the famous Ronnie Scott's Club in London to Jazz at Lincoln Center and Birdland in New York to Oakland's Yoshi's, as well as many of the major jazz festivals. Her style covers a wide range: from gospel and blues to Brazilian Bossa Nova, from Latin to Bebop, from Vocalese to heartfelt ballads. “Everything she sings comes off beautifully, with amazing control. If she sings loud and brassy, she nails it; if she goes soft and silky, she owns it." (Baker and Taylor's CD Hotlist review) Ryan's latest double CD, DOOZY, featuring Cyrus Chestnut, Eric Alexander, Romero Lubambo and Jeremy Pelt, has garnered overwhelmingly positive reviews as well as 4-stars from both DOWNBEAT and held the #1 position nationwide on JazzWeek's industry- standard chart for 7 solid weeks (Only one vocal recording ever matched that: Diana Krall's, “From This Moment On.")

Jazz at the Chimes is a concert series produced by Mary D’Orazi and sponsored by Chapel of the Chimes in Oakland featuring Bay Area talent. Concerts are held at the Chapel of the Chimes – a designated City of Oakland Landmark designed by Julia Morgan. The Chapel provides a wonderful visual backdrop and acoustic listening venue for live music in a setting like no other. Chapel of the Chimes wants to share this architectural treasure with the community and support local jazz musicians. The mission of the series is to honor the individual stories, unique artistry and personal contributions of the jazz artists who are a part of our diverse Bay Area community.