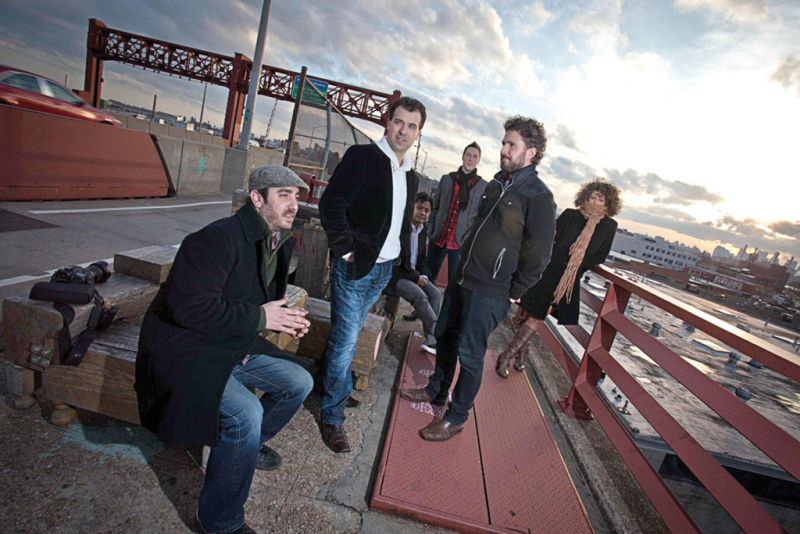 Columbus, OH: The Jazz Arts Group's Inside Track series continues to heat up the Lincoln Theatre stage on Saturday, October 12 with the gypsy jazz of Hot Club of Detroit featuring the unique vocal stylings of French artist Cyrille Aimée.

More than seven decades after the innovations of the Quintette du Hot Club de France, featuring guitar virtuoso Django Reinhardt, combos called Hot Clubs carry on the gypsy jazz sound around the globe – in Tokyo, San Francisco, Seattle, Sweden, Norway, Austria, and many other locales. None, however, offers a fresher take on the tradition than does the Hot Club of Detroit, led by fast-fingered Reinhardt disciple Evan Perri. Following up It's About That Time, Nighttown and the eponymous 2006 debut, Hot Club of Detroit expands its sonic and compositional horizons with Junction. Retaining its original lineup of reeds, two guitars, accordion, upright bass and no drums, the Hot Club of Detroit is joined for the first time by a vocalist: French musician Cyrille Aimée, a native of Django Reinhardt’s hometown and a winner of the 2010 Thelonious Monk International Vocal Competition.

“A lot of bands that model themselves after the Hot Club of France are now working with drummers, or percussion of some sort," says HCOD rhythm guitarist Paul Brady. “We never have. And by doing that it forces us to think creatively about what we can do without it. How can we approach odd meter, how can we approach certain grooves? Regardless of what a drummer can add, that absence to me is interesting and different."

Cyrille Aimée has proven herself to be an unstoppable, undeniable talent in the modern age of jazz and pop music. Internationally renowned and praised for her unparalleled abilities, Cyrille's vocal stylings are synonymous with musical genius. Her culturally rich background has supplied her with the driving force of Dominican rhythm and the incredible swing of the French Gypsies. Taking these natural abilities with her across the world, she has done nothing short of receiving rave reviews and a loyal following in each country she graces with her voice.

Advance tickets are on sale now for $25 (general admission) and are available through the CAPA Ticket Office and through all Ticketmaster outlets. Showtime is 8:00 PM with Columbus' own DewDroppers opening the show.

The Inside Track series gives music lovers from all walks of life the chance to stretch their ears and stretch themselves at the newly restored and historic Lincoln Theatre. The revamped small-ensemble series will also feature Atlanta-based soul band Ruby Velle & the Soulphonics (November 8, 2013); CJO all-stars Byron Stripling and Bobby Floyd in the post-holiday show “Swingin' the New Year" (December 28, 2013); Grammy Award-winning blues guitarist and film composer/actor Chris Thomas King (March 1, 2014); and the ear-bending collaboration of the New Orleans funk of the New Basics Brass Band and bluegrass of The Relentless Mules in “Brass & Grass" (April 26, 2014). Call 614-294-5200 or visit jazzartsgroup.org for more information.

The Inside Track music series is presented by State Auto and Sequent with ongoing support from the Greater Columbus Arts Council, The Columbus Foundation, the Ohio Arts Council, and The Westin Columbus. Media support is provided by The Columbus Dispatch, Columbus Alive, and WCBE 90.5 FM.

The Jazz Arts Group of Columbus (JAG) is America's oldest not-for-profit arts organization dedicated to producing, performing and promoting jazz. JAG is the third largest performing arts organization in Columbus and consists of four focus areas: the Columbus Jazz Orchestra (CJO), one of the world's finest professional jazz orchestras; the Jazz Academy, JAG's extensive instructional programs educating both students and adults about jazz and American music; Inside Track, a jazz and blues performance series produced at the historic Lincoln Theatre and beyond; and Affiliate Musicians, a program providing employment opportunities for professional musicians.