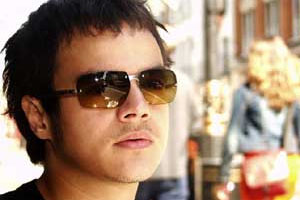 English singer/songwriter/pianist/multi-instrumentalist Jamie Cullum, who has been dubbed “a one man British invasion" (Hollywood Reporter), has announced a series of US tour dates to coincide with the U.S. release of The Pursuit on March 2, 2010. The album is Cullum's third for Verve Records and his first in four years. It follows last year's Golden Globe nomination for Cullum and Clint Eastwood of “Gran Torino" as Best Original Song. Cullum's prior album releases Twentysomething and Catching Tales were international crossover smashes selling more than 4 million combined copies worldwide. Already released to great critical and commercial success in Europe and the U.K., The Pursuit has garnered Top 10 digital debuts on the ITunes Top Album Chart in the U.K., Germany, France, Spain and ten other countries. The album is currently #14 on the Billboard European Top 100 Album Chart.

Like the exploding piano on its cover, the long-awaited new album The Pursuit blows away audience preconceptions with 14 smoldering tracks that seamlessly run the gamut from swinging standards and yearning singer-songwriter confessionals to 125 BPM house dance tracks and resurrected Broadway ballads. The album features nine Cullum originals and five cover songs that showcase Cullum's unique voice and iconoclastic interpretive skills. The self-penned gems include the buoyant first single “I'm All Over It," the cheerfully apocalyptic “Wheels," the animated swing of “You and Me Are Gone," Cullum's love song to music “Mixtape" and his love song to love “Love Ain't Gonna Let You Down."


Elsewhere on the album, Cullum reinvents 1930s jazz standards (Cole Porter's “Just One Of Those Things" and “Love For Sale"), brings the dance floor into the bedroom (Rihanna's “Don't Stop The Music") and cleans the pancake off the Great White Way (Leslie Bricusse's “If I Ruled the World" and Stephen Sondheim's “Not While I'm Around").

Since the release of Cullum's last album, he has seen an ever-growing courtship with Hollywood blossom: beginning with 2007's animated Disney feature Meet The Robinson's in which Jamie was the singing voice of Frankie The Frog, continuing with his vocal on the Golden Globe-nominated “Best Original Song" from the John Cusack film Grace Is Gone, and culminating in his co-writing and performing with Clint Eastwood the Golden Globe- nominated “Best Original Song" from 2008's Gran Torino. Cullum was also recently featured in the Clint Eastwood executive-produced documentary Johnny Mercer: The Dream's On Me celebrating the 100th anniversary of the great American songwriter's birth.

The dates for the American tour as follows: