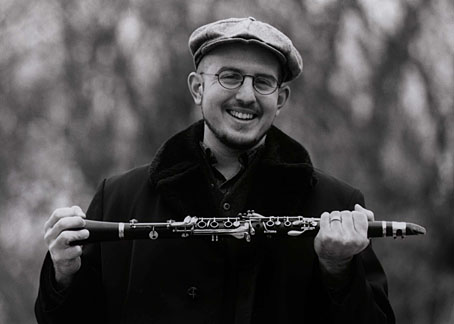 slideshow
On November 2nd, Chicago-based clarinetist/composer James Falzone, and the four year-old trio version of his longstanding Allos Musica ensemble, will release their debut recording, Lamentations (Allos Documents). The group, which has performed at creative music venues all around Chicago and will serve as ensemble-in-residence for the MOMENTA dance company in November, features oud player/vocalist Ronnie Malley and hand drummer/percussionist Tim Mulvenna. Its music is a mix of Falzone's original compositions and collective improvisations inspired by Arabic musical forms such as the Longa and Muwashah, the work of Tunisian oud master Anouar Brahem and the cross-cultural significance of the lament in music and literature from around the world.

“I was working on a lot of this music in 2006 as U.S. forces were more and more entrenched in the Iraq war," Falzone recalls. “It did, and continues to, trouble me a great deal. During the build up to the invasion, I was studying Arabic music and seeking out Arabic neighborhoods where I could hear the music and buy CDs. I was in a grocery store watching Al Jazeera with the shopkeepers when some of the heaviest fighting was taking place. There is a phrase from Phil Ochs I like a lot and use in programs for this project: 'In such ugly times, the only true protest is beauty.' This sums up why I put these laments together. I was lamenting what was happening in my country, the way we were thinking, but I'm not a very politically motivated man. For me, it comes out in creative ways."

“The only way to sum up the style of Chicago clarinetist and composer James Falzone is to say that it can't be done," explains Time Out Chicago's Matthew Lurie. “He is one of the city's most focused and inquisitive clarinetists," writes the Chicago Reader's Peter Margasak, “and his compositions favor a rigor and precision that's rare." Cadence reviewer Troy Collins adds, “Falzone blends an impressive array of influences into a singular style all his own. Composing yearning lyrical lines filled with dramatic turns of phrase and dynamic shifts in mood, his writing style blends the angular rhythmic punch and spontaneous freedom of Henry Threadgill with the folksy, subdued lyrical quality of Jimmy Giuffre and the esoteric mysticism of Oliver Messiaen."

Falzone's multi-facted career exists at the intersection of a multitude of musical styles and traditions. An acclaimed member of Chicago's jazz and creative improvised music scene, he is also a veteran contemporary music lecturer and clinician, the longtime Director of Music for Grace Chicago Church and a prolific, award-winning composer who has been commissioned by chamber groups and symphony orchestras among other institutions. When not performing or recording with groups such as Tim Daisy's chamber-jazz trio Vox Arcana, the French music ensemble Le Bon Vent and Dutch saxophonist Jorrit Dijkstra's The Flatlands Collective, he is gracefully balancing his prodigious musical interests and experiences in his own Allos Musica ensemble, the umbrella for most of his musical experiments since 2000. His most recent release is last year's Tea Music, which features his all-star quartet KLANG playing original compositions inspired by clarinetist/composer Jimmy Guiffre's innovative small groups from the mid-1950s. Learn more about James Falzone at allosmusica.org