Elysium Furnace Works' 2018 season kicks off with the acclaimed duo of tenor saxophonist James Brandon Lewis and drummer-percussionist Chad Taylor on Saturday, March 31 at 8 PM at the Howland Cultural Center in Beacon, NY. 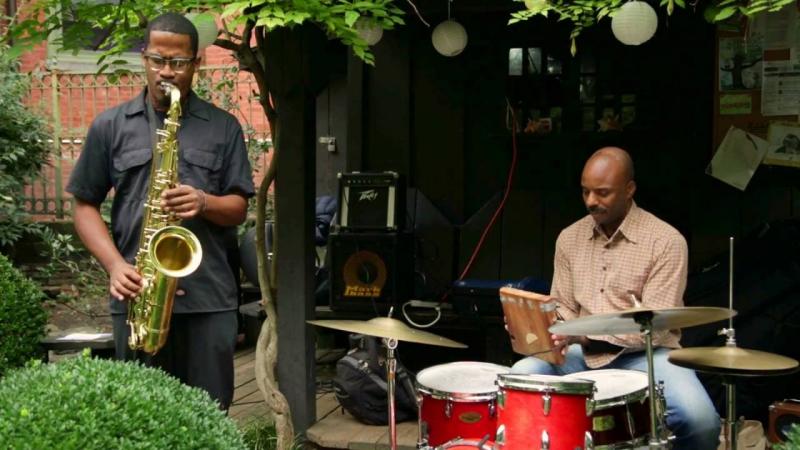 slideshow
“James Brandon Lewis, a jazz saxophonist in his 30s, raw-toned but measured, doesn't sound steeped in current jazz-academy values and isn't really coming from a free-improvising perspective. There's an independence about him.” —The New York Times

“With an insatiable appetite for music on the fringe, drummer Chad Taylor has been an active participant in the creative music environments of both Chicago and New York. Not confined to any particular style, Taylor threads an array of astounding patterns and cadences.” —All About Jazz

Elysium Furnace Works is proud to announce its 2018 calendar of cutting-edge musical performances, all taking place at the gorgeous, 140-year- old Howland Cultural Center, located at 477 Main St. in Beacon, NY. Kicking off EFW’s 2018 season will be the acclaimed duo of tenor saxophonist James Brandon Lewis and drummer-percussionist Chad Taylor, performing on Saturday, March 31 at 8 PM. Admission will be $20 at the door. Lewis and Taylor will be appearing in support of their new duo recording Radiant Imprints, released on the Off-Record Label.

Karuna: Master drummers Hamid Drake and Adam Rudolph draw upon their decades-long association in ensembles alongside such figures as Don Cherry, Yusef Lateef, Pharaoh Sanders among others in this ecstatic, cross-cultural collaboration drawing on multiple percussion instruments and musical practices from around the world.

Kid Millions/Sarah Bernstein: Celebrated drummer for such indie bands as Oneida and his own Man Forever, Millions joins forces with violinist, vocalist and composer Bernstein for this fearless, electrified voyage into sonic territories at once unsettling and lushly beautiful. Rare for an avant-garde recording, their recent limited release Tense Life on 577 Records sold out its entire run in a matter of weeks.

Mike Pride Trio: With a resume that spans everyone from Anthony Braxton to hardcore punk legends MDC, as well as having performed before hundreds of thousands across the country opening for Amy Schumer as a member of Locksmith Isidore, drummer/composer Pride leads a fearless, peerless trio featuring Jon Irabagon on saxophones and Fred Lonberg-Holm on cello.

Atonal Hits: This accomplished duo — pianist Illya Filshtinskiy and violinist Katha Zinn— has performed around the world many times, from Asia to Turkey to Carnegie Hall. As suggested by their humorous name, Atonal Hits specializes in performing not only the most challenging works by some of the most forward-thinking classical composers of the last century, but also such timeless masterpieces as in their recent project recording the complete sonatas for violin and harpsichord of J.S. Bach.

Elysium Furnace Works is a cooperative project co-led by Mike Faloon, James Keepnews and Steve Ventura. Elysium Furnace Works seeks to present the work of vanguard artists in settings as dedicated and uncompromising as the art itself, focusing primarily although not exclusively on live music performances in and around Beacon, NY.

Acclaimed saxophonist & composer James Brandon Lewis has been described as a Visionary Composer and Tenor saxophonist has received accolades from the New York Times, NPR and Ebony Magazine, who hailed him as one of the “ 7 Young players to Watch in today’s scene”. Lewis has been endorsed by Jazz legend Saxophonist Sonny Rollins “ Promising young player with the potential to do great things having listened to the Elders”. – Jazz Magazine (France). Lewis at the request of Rollins participated in a tribute concert honoring the Jazz Legend sharing the stage with Jimmy Heath, Ravi Coltrane, James Carter and many others.

Born In Buffalo, NY James Brandon Lewis began his pursuit of music at the age of 9 and would begin his music studies at the Buffalo Academy for the Visual And Performing Arts exposing him to Jazz Legends such as Dave Brubeck, Doc Severinsen , Local Legends Carol Mclaughlin , and Charlie Parker Alum the great pianist Al Tinney . James Brandon lewis holds a Bachelors Degree from Howard University and a MFA from California Institute of the Arts .

To date James Brandon Lewis has released 4 albums as a leader, 3 achieving critically acclaim. He has toured extensively world wide with his own ensembles, as well as shared the stage, and recorded with amazing musicians such as William Parker, Hamid Drake, Cooper Moore, Jamaaladeen Tacuma , Rudy Royston , Gerald Cleaver , Charles Gayle, Dave Douglas , Richard Davis , Weather report Alum Alphonso Johnson , Ravi COltrane, James Carter, Jimmy Heath, Joe Lovano and many others . Lewis is also the Co-Founder of Heroes Are Gang Leaders a collective of musicians and poets that keep a foot in the past,present, and future.

James is deep in an intrepid artistic continuum that explores identity and spirituality through challenging and awe-inspiring concepts and epiphanic playing that melds formalistic technique, bold exploration, and strains of gospel and blues. James Brandon Lewis presents a rich dialogue with his audience that is both fiery and cerebral.

Chad Taylor is a composer, educator, percussionist, scholar, and co-founder of the Chicago Underground Duo and the myriad spinoff Underground ensembles with trumpeter Rob Mazurek.

Originally from Tempe, Arizona, Taylor grew up in Chicago where he started performing professionally at the age of 16. Since then, he has performed around the world with avant-luminaries including: Fred Anderson, Derek Bailey, Cooper-Moore, Pharoah Sanders, Marc Ribot, Peter Brötzmann, and Malachi Favors.

Taylor leads his own band with pianist Angelica Sanchez and bassist Chris Lightcap. Their debut recording, Circle Down, grabbed a five-star kudos from AllMusic, which stated: “What is remarkable is that there is no wasted motion, no histrionics, or grandstanding, as pure emotion is translated to superlative music making on this most highly recommended recording, one for the ages.”

Chad holds a BFA in Jazz Performance from New York City’s The New School and an MFA in Jazz Research and History from Rutgers University.