Italian Bassist Maurizio Rolli Touring in the US 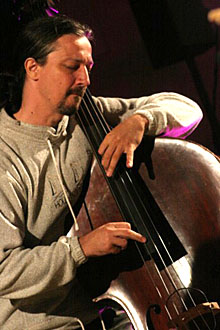 Italian bassist and Mark bass endorser Maurizio Rolli will tour the United States in February, 2011, giving bass clinics and performing tribute concerts to Jaco Pastorius with the Chicago Jazz Orchestra and his own band, which features Otmaro Ruiz on piano, Bob Sheppard on saxophones and drummer Israel Varela.

The itinerary is as follows:

The tour will then continue to Los Angeles (Vitello's), Costa Rica, Panama and Mexico City for performances with the Maurizio Rolli Dream Band.

He received international attention for his release Moodswings: A Tribute to Jaco Pastorius (2001), which was named “CD of the month" by Bass Player magazine in August, 2002. Within the last year he released “Rolli's Tones," featuring metal and rock classics by Rush, Aerosmith, Ozzy Osbourne and others arranged by Rolli and accompanied by “Rolli's Tones Big Band" and a list of jazz superstars including Peter Erskine, Mike Stern, Hiram Bullock, Bob Sheppard and Bob Franceschini.