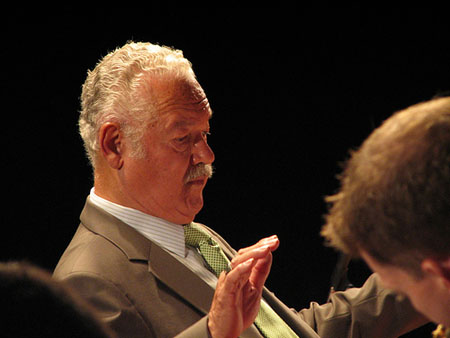 As Latin-jazz legends go, saxophonist Ray Santos ranks high on the list. Few living Latin-jazz artists today can claim to have played in and arranged for the bands of Machito, Tito Puente and Tito Rodriguez. To give you an idea of what this trifecta means, it would be akin to a saxophonist playing in the Duke Ellington, Count Basie and Woody Herman bands. In addition, Ray is one of only a handful of surviving musicians who recorded on Kenya: Afro-Cuban Jazz, a 1957 landmark album that combined Machito's Latin-jazz band with Cannonball Adderley, Doc Cheatham and Joe Newman.

Ray's arrangement of Beautiful Maria of My Soul for The Mambo Kings movie was nominated in 1992 for an Academy Award in the Best Song for a Movie Category. That same year, his arrangements for Linda Ronstadt's Frenesi album helped it win a Grammy Award for Best Tropical Latin Album of the Year.

In Part 1 of my two-part interview with Ray, 80, the Latin-jazz saxophonist talks about growing up in the Bronx, the jazz record that had the most influence on him, attending Juilliard with Phil Woods, working in Latin bands in the Bronx, and winning a spot in Machito's Palladium orchestra in 1956:

JazzWax: Where did you grow up?
Ray Santos: In East Harlem. In 1942, when I was 13 years old, we moved to the Bronx. My family needed more space. The Bronx was fine, but it was a culture shock. We moved into a neighborhood on Freeman Street that was 90% Jewish. It was very different from East Harlem, but I assimilated quickly. For the first few days, I walked for miles looking for Puerto Rican kids but couldn't find any [laughs].

JW: Was school an adjustment?
RS: In junior high school, all of the kids liked swing and big band music, so we all had that in common. Who you were mattered less than which musicians you liked. We all listened to Benny Goodman, Lionel Hampton, Nat King Cole, Stan Kenton and others. My friends at school got me into jazz. Latin-jazz came later.

JW: Did you hear Puerto Rican music at home?
RS: All I heard on my grandmother's Victrola was traditional son music. Friends of hers would come to visit and bring records. My Puerto Rican accent disappeared fast. I wanted to blend in, and I soon was talking Bronx [laughs].

JW: When did you start playing the saxophone?
RS: Around 1944 or 1945. Al Alvarez, a close friend of mine in junior high school, was from Spain. We both loved jazz. One day he took me to his apartment and played me a record of Body and Soul by Coleman Hawkins. I couldn't believe what I heard--the tone and the beautiful melodic variations. I didn't know at the time that it was originally a pop tune. I was hooked immediately.

JW: Where did you learn to play?
RS: Al played the saxophone in school and told me there was a place in the Strand Hotel on 48th and Broadway called the Hartnett National Music School. For $40 they gave you 20 saxophone lessons, at 15 minutes each. Al said they also loaned you an instrument.

JW: What did your parents say?
RS: My father went for it. I learned quite a bit about the rudiments of music there. Al was much more talented on the sax than I was. He was a natural. It turned out that what they gave you to play on was a C-melody sax, which was between an alto and tenor sax. They were relics. You'd practice your lesson at home, come in and the guy would tap the music stand with a baton and you'd start playing what you had rehearsed.

JW: Did you play in a band?
RS: There were a lot of kid big bands in the Bronx. They had three or four saxes, two or three trumpets and a rhythm section. There were no bass players. They were rare.

JW: Were you interested in becoming a musician in high school or was it a hobby?
RS: At first I was interested in aviation. My high school had a course in pre-aeronautics and I loved it. The school also had a music teacher and a band, and I got to know other players. That's how I got my first gig in the Catskill Mountains, in 1946. There was a guy named Marty Blyman who played trumpet. His uncle was an agent. We auditioned for his uncle and got a summer gig near Monticello. N.Y. We played stock arrangements that we bought on 48th St. for 75 cents each. Marty was on trumpet and there were two saxes, a piano and drummer.

JW: Was aviation still an interest when you got back from the summer gig?
RS: [Laughs] Aviation was slowly disappearing and music was taking over. After high school, I practiced hard for a year and a half and played with the kid bands in the Bronx. But nothing was happening for me. Finally my father said, “Get a job or go to school." So I looked into Juilliard. I said to my father, “If I get into the school on an audition, will you pay for it?" He said he would. So I practiced the most complicated pieces I could find. I took the audition, and when I was done, there were no smiles or frowns. A week or so later, a letter arrived. I was accepted into the school.

JW: How much was tuition?
RS: About $400 per semester, $800 a year. My father worked as a doorman on Park Avenue and my mom worked in a factory that made Raggedy Ann dolls. I was an only child, so they could afford the tuition.

JW: Did you fit in at Juilliard?
RS: I felt out of place at first. I was around protges who were fantastic players. But it didn't discourage me. In fact, being with them encouraged me to become a practice fiend to catch up, which I never did [laughs]. Phil Woods [pictured] was a year behind me. Teo Macero was there. So was Leontyne Price. I was exposed to classical music and became amazed at how much jazz harmony came from Stravinsky and Ravel. We'd analyze the scores of classical works, which got me into arranging. Eventually I was devoting as much time to music theory and writing as I was to practicing the saxophone.

JW: What did you do after you graduated?
RS: When I completed my studies at Juilliard in 1952, I started to get work with different bands, including the Noro Morales Orchestra. Noro was a very good pianist.

JW: Why did you play Latin music, given how exposed you were to jazz and classical?
RS: Even before Juilliard I was already playing in Bronx Latin bands. Adjusting to Latin wasn't a problem. It was the culture I came from. My mother always had Latin music on the radio. I felt the Latin music. It was something I knew. As the mambo became more popular and exciting, I wanted to embrace it. My love of swing allowed me to blend a lot of jazz riffs and orchestrations into mambo charts. In 1954, Noro [pictured] broke up the band and decided to form with a septet. He was a great pianist and could make a living as a solo player.

JW: In 1956, you auditioned for Machito. How did that happen?
RS: One of the tenor saxophonists who had been with Machito [pictured] from the start had left. By then I had
been a familiar face around the band. Whenever Machito played the Palladium Ballroom on 53d St. and Broadway, I'd go around to see the band and stand on the side so I could see their music. I knew tenor saxophonist Jose Madera, and when a chair opened up, he told Machito that I was ready. Trumpeter Mario Bauza, who handled all of Machito's business, called me for the audition. The audition was going to be live, while the band was playing that night. He told me to pick up a band uniform at his apartment on Columbus Ave. and 106th St.

JW: How did you feel when you put that uniform on for the first time and looked at yourself in the mirror?
RS: Excited. Very excited.

Tomorrow, Ray talks about what he observed from the stage of New York's Palladium Ballroom, why hard drugs didn't plague Latin-jazz bands, and the differences between Machito, Tito Puente and Tito Rodriguez.

JazzWax tracks: To hear the excitement of the Big Three in the late 1950s, try sampling Machito at the Crescendo (with Ray Santos on tenor sax) here, Tito Puente at Grossinger's here and Tito Rodriguez's Mambo Madness here. The coiled excitement on these albums is incredible. Also fabulous is Machito's Kenya: Afro-Cuban Jazz, particularly Conversation. It's available at iTunes or at online music sites.

JazzWax clips: I want to share three clips with you to illustrate the music, excitement and power of Tito Rodriguez:

First, here's a clip of Tito Rodriguez in the 1960s on a TV show singing Que Sera. That's Ray Santos all the way to the left in the sax section...

Here's a clip of Tito Rodriguez singing Cara de Payaso that an animator put together. Dig the brass arrangement...