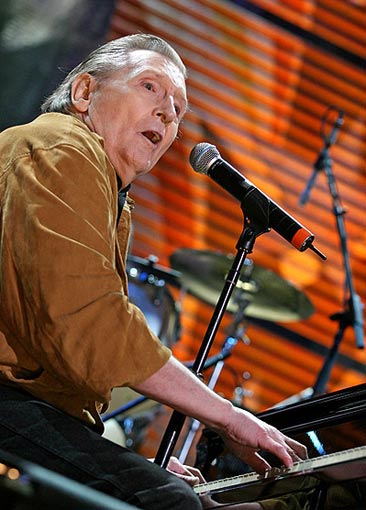 slideshow
Driving south out of Memphis on I-55 last Wednesday, I popped on Jerry Lee Lewis' new CD, Mean Old Man. Officially released yesterday, the album is a tour de force of little-known country and rock songs featuring Lewis on piano accompanied by a who's who of guests, including Mick Jagger, Merle Haggard, John Fogerty, Mavis Staples, Ringo Starr and others. As I sped along with the music blasting, I couldn't help but marvel at how cool it was to be listening to the music of the guy I was about to visit.

When I arrived at Jerry Lee's 45-acre ranch in Nesbit, Miss., I encountered a large gate similar to the one at Elvis Presley's Graceland—except Jerry Lee's has a steel image of a baby-grand piano on it. After the gate slid open, I drove up to the house that Jerry Lee had purchased in 1972. As I climbed out of my rental car, I was met by Phoebe Lewis, Jerry Lee's daughter, manager and album producer [pictured].

After exchanging pleasantries, Phoebe gave me a tour of the upstairs, which included a look at the old Stark upright piano [pictured] that Jerry Lee's parents had bought after hearing him play his aunt's piano at age 8. The piano's keys were a haunted mess—some up, some down, some halfway down and all missing the white ivories thanks to Jerry Lee's young sewing-needle hands hammering away on them. My goodness, there I was staring at one of the instruments that launched rock 'n' roll and touching the notes reverentially. I also met Judith Brown, Phoebe's aunt, who keeps an eye on Jerry Lee and whose smile is as big as a Georgia moon.

To the uninitiated, Jerry Lee Lewis is a crazed pianist from the back woods who emerged in the late 1950s to score a few hits, married his 13-year-old cousin and found his career derailed in 1958 when the British media caught wind of his nuptials. True, Jerry Lee is from a rural part of Louisiana. And true, he did marry his 13-year-old second cousin (they were married for 13 years and Phoebe is his daughter from that marriage).

But Jerry Lee is much more than a mere piano pounder. He's one hell of a boogie-woogie pianist, a natural with a photographic memory, which means he knows the melodies and lyrics to hundreds of songs despite not being able to read a lick of music. Self-taught, he had only one formal lesson, a brief encounter that led to a whack by his teacher after he cracked smart about playing scales.

As a teen, Jerry Lee practiced up to 13 hours a day, taking on the boogie-woogie records he heard on the radio and the blues and r&b he heard performed live after sneaking into Haney's Big House, a club in his hometown of Ferriday, La. There was something about a piano that sent Jerry Lee into a frantic trance, causing him to play as though possessed.

By the time he began to have major hits on Sun Records in 1957, Lewis was already the first-call studio pianist for the label. If Elvis' gimmick was the hip wiggle and leg wobble, Jerry Lee's thing was hitting the piano keys with a fury so passionate that eventually his carefully combed hair would flop down in front of his face. Presley loved Jerry Lee's playing and routinely asked him to drive the half hour north to Graceland just to hear him play. Elvis' favorite was Jerry Lee's You Win Again.

But Jerry Lee was much more than a pianist. His on-stage intensity and off-stage wild streak made him a role model for every major rock star who followed in his footsteps. Little Richard and Chuck Berry may have launched sexually charged rock 'n' roll in 1955 and Elvis certainly popularized it in 1956. But it was Jerry Lee's smoldering act in 1957 and wild-man behavior that John Lennon, Mick Jagger and others admired and embraced to advance their own careers and stand out. Rock was emotional, high-strung music, and Jerry Lee had it just about right. Audiences responded.

One more truth: Jerry Lee isn't really a rocker. He's much more than that. Those who know Jerry Lee's music recognize that there's a lot of country shouter in him, which is why he's the unintentional father of rebel-rock and country-r&b. After his career foundered in the early 1960s and the British Invasion began in 1964, Jerry Lee's earnings collapsed and he wound up playing juke joints across the South. Then in 1968, he switched from rock to country and had a string of top country hits. What you hear in Jerry Lee's country voice and country piano are rainy Southern nights, whiskey neat and closing time.

When Jerry Lee appeared in his living room last Wednesday afternoon, he was in a pair of burgundy pajamas with gold stripes and dark slippers. He's not the hare he once was, but his midday slumber-wear had more to do with relaxing before his jam-packed September schedule was to begin this week.

Here's a taste of our conversation:

JazzWax: How in the world did you go from taking one piano lesson to being a boogie-woogie virtuoso?
Jerry Lee Lewis: I wonder that myself [laughs]. I just taught myself everything I know. I heard other piano players, of course, but I didn't pay much attention to them. I just loved boogie-woogie and the blues. And I practiced hard.

JW: There's a lot of improvising in the songs you play. I don't think you've ever played a song the same way twice.
JLL: No, never. I always do it different. That's true of any song I ever played.

JW: You even seem to take pleasure in fooling your musicians by going up a scale or down, or ending on an uneven note—the opposite of what's expected.
JLL: Yeah, I like to keep them guessing [laughing]. It's all about keeping people on edge. That's where the excitement is.

JW: Your music is so different than even the songs of your contemporaries—the unrestrained piano playing, the heartfelt blues and tricky improvisation. Your music is so... unpasteurized.
JLL: That's what Elvis said [laughing]! He did. When I was up at Graceland, he'd tell everyone in the room, “This guy is a genius!"

JW: Do you like listening to yourself play? It must be fun.
JLL: Yeah, it is. I delight myself by what comes out. Sometimes, of course, I don't feel like playing at all. But that's rare.

JW: When I see video clips of you, the expression on your face tells me you're far, far away. Where are you at those moments?
JLL: Yeah, I'm someplace where no one can get at me. It's another world there.

JW: I suspect you wouldn't be as convincing if you weren't in that zone.  JLL: That's true. Each year, we have “Memphis in May" up in Memphis. It's a music festival. All the tip-top musicians are there. And they can't wait for me to go on. They wait and wait and then gather 'round.

JW: I can't think of too many rock or country musicians who love music as much as you do.
JLL: It's all about the music, my entire life. When I'm playing, I'm preaching through my hands, with the music. I guess that's why they call it “devil's music" when I play [laughs].

JW: But it's not really. It's music from the heart that moves people.
JLL: You're right about that. I'm singing and playing for everyone, but I'm also doing it for people who really understand the blues and the words. All of my songs are stories. Either you have experience with what I'm singing or you don't. Either way, the beat sweeps you up. But if you truly get the words and what I'm putting into it, then you are getting something really special.

JW: Does the intensity of your playing shock you sometimes?
JLL: [Laughs]People have always thought that what I do is an act. It's not really. I'm just so deeply into it, the music comes out that way. If you want to move an audience, you have to be able to do that. It's hard to do but you have to get there. When I come on, I'm aiming to take control of the audience and work them into a frenzy. They're expecting it. It's the music that does it because music is pure. When I'm performing, I'm telling, I'm not asking. It's a different approach.

JW: And before long, the piano is behaving like a train. Do you feel like you're driving the piano or playing it?
JLL: [Laughs] Both. Whoo, whoo [laughs].

After our hour-long conversation, I asked Jerry Lee if he'd sit down at the piano to show me how he uses his hands to make his signature runs up and down the keyboard. He did and the result was fascinating. Then he launched into a short boogie-woogie. The experience for me was exhilarating. Now that was some piano lesson.

Just before Jerry Lee retired to his room and Phoebe graciously cut me a slice of homemade peach pie, Jerry Lee and I shook hands again. As we did, he looked at me in the eye and said, “Thank ya Killer for making the time to come out." Wow. The Killer just called me Killer.

JazzWax tracks: Mean Old Man is a tremendous album that any jazz listener will love. The mix and fidelity are sterling, the singing is from the heart and the song selection is perfectly offbeat and strong.

Dig the title track, Mean Old Man, with Ronnie Wood. Or Rockin' My Life Away with Kid Rock and Slash. Dead Flowers with Mick Jagger is an album high point (one can only hope an entire album of Jerry Lee-Jagger duets will be forthcoming). Other gems include Sweet Virginia with Keith Richards and Will the Circle Be Unbroken with Mavis Staples, Robbie Robertson and Nils Lofgren. Aw heck, every single track on this thing is as authentic as they come.

There's a 10-track version here and a 19-track deluxe version here. Do yourself a favor and buy the deluxe version. It's only a few bucks more, but I promise you won't be sorry. Both also are available at iTunes.

The first is from 1964, in the U.K., featuring Jerry Lee singing Elvis' favorite, You Win Again...

Here's Jerry Lee in 1983 in London singing and playing Sweet Georgia Brown. Dig the speed of those hands...

And here's Jerry Lee in London in 1989 singing Rockin' My Life Away...