New arrangements, created by Earl McIntyre and featuring members of Mingus Dynasty, reimagine Mingus’ Nobody Knows the Bradley I Know, Duke Ellington’s Sound of Love, and Don’t Let it Happen Here to include the powerful sound of a full symphony orchestra.
&#151Andrea Kotuk 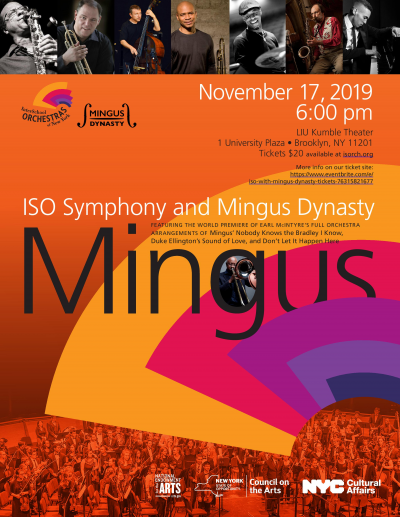 InterSchool Orchestras of New York partners with Mingus Dynasty to present a thrilling concert of Mingus’ music! New arrangements, created by Earl McIntyre and featuring members of Mingus Dynasty, reimagine Mingus’ “Nobody Knows (the Bradley I Know}," Duke Ellington’s “Sound of Love," and “Don’t Let it Happen Here" to include the powerful sound of a full symphony orchestra. The ISO Symphony Orchestra, under the direction of Barry Stern consists of students, aged 12 to 19, from every corner of New York City.

This concert will take place at Long Island University’s Kumble Theater, 1 University Place, Brooklyn, NY at 6 pm on Sunday, November 17, 2019. Tickets can be purchased for $20 at isorch.org until the concert.

Born in Brooklyn N.Y. Earl McIntyre received his first musical training from his father, a gifted amateur musician, who saw to it that the entire family became proficient at playing brass instruments. While attending the High School of Music & Art, he studied trombone with John Clark, Jack Jeffers, Alan Raph and Benny Powell. He also developed relationships with composer William S. Fischer and tuba player Howard Johnson. At Mannes College of Music, he studied Bass trombone with Simone Karasick and tuba with Thompson Hanks. Later he studied arranging with Slide Hampton and Bob Brookmeyer.

Renée Manning is a widely celebrated vocalist/composer and has been educating students for the past 35 years. During her 10 years as instructor and Vocal Chair at the Brooklyn Conservatory of Music, she has been awarded several grants including Met Life grants for her choral work with Prospect Hill Senior Center, Brooklyn. Renée has toured, performed and recorded with the likes of Taj Mahal, Carmen McRae, Dizzy Gillespie, David "Fathead" Newman, Nat Adderley, Mel Lewis Orchestra, Mingus Big Band, Chico O'Farrill Orchestra, George Gruntz Big Band, David Amram, actor John Ventimiglia and many others. She has developed her own vocal method which has achieved extraordinary results with seniors, children and people of all ages and disciplines. Renée is the Co-Founder of Excelsior Music Studio where she teaches this unique method.

The nimble and expert Mingus Dynasty was the first band Sue Mingus organized after Charles Mingus’s death in 1979. Although big bands like the Glenn Miller and Tommy Dorsey bands had continued to perform after their leader passed on, a similar legacy never existed for smaller ensembles. Because Mingus always said he was first and foremost a composer, and because he left behind over 300 compositions that deserved to be played, a band carrying on his music became a natural, if unanticipated, mission. For the sake of authenticity, the first Dynasty bands were expected to include only musicians who had actually performed with Mingus—except for the bassist, of course. Today, nearly forty years later, the rich legacy of Mingus music ignites the bandstand while new generations of musicians—many of them not even alive during the composer’s lifetime—add their individual voices and continue to interpret and build on his compositions. Together they transform a musical legacy into a modern creative force. As jazz journalist Nat Hentoff once intimated, Mingus Music is one of the more absorbing phenomena in jazz.

About InterSchool Orchestras of New York

Founded in 1972 and incorporated in 1974, the InterSchool Orchestras of New York (ISO) began with a single orchestra of 20 children. Today, ISO serves more than 250 children, creating opportunities for school-aged children in New York City to make music together through four tiered level orchestras. ISO provides a nurturing environment where all children can realize their personal best, achieve high artistic standards, and share music with the community. The ensembles perform in major concert halls, schools and community centers, bringing great music to over 7,000 people annually. Generous financial aid and scholarships ensure that every child can participate.