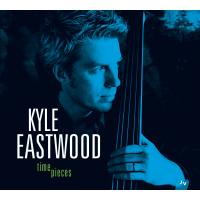 In the 17 years since the release of From There To Here, Kyle Eastwood’s first album as a leader, the multi-talented double bassist, composer and producer has forged a dynamic musical path. His artistry is eclectic, yet refined and transcends the boundaries of jazz by exploring an ever-widening range of musical influences. While continuing to develop his parallel career as a composer and arranger on his legendary father Clint’s Oscar nominated films Mystic River,” “Million Dollar Baby and Letters from Iwo Jima, Eastwood has reaffirmed traditions while creating truly contemporary, lyrical and melodic jazz. He has flirted with electro-jazz cool on Paris Blue (2004); delved into 70s-tinged “smooth jazz” accents and grooves on Now (2006); and gone “arty” urban chic on the subtly mixed Metropolitan (2009).

Eastwood’s latest release Time Pieces is all at once a fresh landmark in Eastwood’s discography and a culmination of a recent reassessment of his personal and artistic aesthetic that began with the release of Songs From the Chateau in 2011. The new phase of his career has involved a powerfully swinging, yet eminently sensual quintet of young English musicians: starting with Andrew McCormack (piano), Quentin Collins (trumpet and flugelhorn) and now including Brandon Allen (tenor and soprano sax) and Ernesto Simpson (drums). Eastwood brilliantly confirmed this new creative foundation on The View From Here (2013), often giving the impression of connecting with jazz archetypes while focusing on the pure joy of group interaction.

Time Pieces is a rich extension of this ongoing “transition,” a work infused with melodic elegance and a sustained sense of groove organized around the quintet’s often-collective compositions. It also features a thoughtful and sensual reading of Herbie Hancock’s “Dolphin Dance” and a dense, lightning fast romp through Horace Silver’s “Blowin’ The Blues Away” that reflect the bassist’s passion for lyrical hard bop. The collection launches with the infectious, spirited and funky “Caipirinha.” Following the Silver and Hancock re- imaginings, the band digs in with the lively and swinging “boogaloo” grooves of “Prosecco Smile,” then eases into the seductive melancholy of “Vista” and the freewheeling high energy “Peace of Silver,” fashioned as a tribute to the jazz piano legend who passed away during the recording of Time Pieces.

With its subtle marching beat and moody, sensual sway, “Incantation,” finds a direct heart line to the lyricism of Wayne Shorter. Eastwood finds new expression for one of his memorable film scores, “Letters From Iwo Jima,” which he follows with the hypnotic, meditative “Nostalgique” and the feisty, hard-swinging bebop explosion “Bullet Train.” Time Pieces wraps with the fun and freewheeling visit to the “Corner of 3rd and 6th Avenue,” while the album’s limited edition, four side LP version includes the gently bluesy, easy rolling Miles Davis tune “Pfrancing (No Blues).” The Miles track features a different American based ensemble: pianist Richard Germanson, trumpeter Alex Norris, tenor saxman Jason Rigby and drummer Joe Strasser and was recorded live at JAZZIZ Nightlife in Boca Raton, FL where Kyle will again perform on his forthcoming tour.

“What I wanted to do in this record is pay my debt to jazz in the late 50s and early 60s, says Eastwood. “It was this lyrical hard bop, full of groove and sophisticated harmonies, exemplified by Art Blakey and the Jazz Messengers when Lee Morgan and Wayne Shorter were in the group, Horace Silver’s Blue Note recordings and different quintets Miles had throughout the 60s. It's the music that I like and that has never ceased to fascinate me since I discovered it as a teenager. What was amazing at the time was how all these groups had an immediately identifiable sound signature. I wondered where this singularity emerged from and I concluded that this was primarily the result of a collective work in the long run. It is this way of thinking and music making that I sought to reconnect with on this new album.”

Although Eastwood was deeply inspired by the sounds and group aesthetic of that rarefied time in jazz history, Time Pieces is a mature work that doesn’t borrow forms of the past superficially. Instead, it constantly manages to find a powerful balance between the more assertive hard bop at the turn of the 60s (in its relationship to the blues and in its orchestral potential) and a resolutely contemporary way to interpret this tradition. The bassist and his band bring their unique individual and collective experiences to the project, collectively drawing on the history of popular music and jazz to create a rich, diverse and contemporary experience that taps into everything from pop and rock to electro and the many forms of African-American music.

“This great ensemble I’m working with is designed like a true musical collective,” Eastwood adds. “I brought to the writing and recording sessions pieces of melodies and chord progressions, but most often the songs and their arrangements were crystallized in the studio during rehearsals. The association that I have with pianist Andrew McCormack and trumpeter Quentin Collins extends back almost 10 years now. It is a luxury to be able to develop a project on a long-term basis. That longevity is obviously reflected in the music we create. But if we’re the heart and soul of this quintet, the newer musicians’ ability to fit into our flow was equally important. Brandon Allen on saxophones and Ernesto Simpson on drums have truly enriched this album by opening our core sound to fresh and exciting new horizons.”

US tour dates are as follows: