SOURCE: ALL ABOUT JAZZ
February 14, 2003
Sign in to view read count 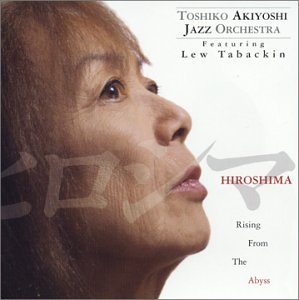 Inspiration is often the root of great musical performances, and the manner in which this quicksilver of all tuneful conjurers is shared among instrumentalists and conveyed to audiences fairly determines a work's uniqueness, power and success. Two new CD releases from True Life Entertainment give proof that the imaginative and situational well-springs that inform memorable jazz are, indeed, disparate and vast. On Hiroshima--Rising From the Abyss from the Toshiko Akiyoshi Jazz Orchestra featuring Lew Tabackin, recalling the cataclysmic use of the atomic bomb to destroy one of Japan's largest cities at the end of World War Two and issuing a message for peace frame the performances on an album-length 'live' concert recording, while Pas De Trois, the highly anticipated second release from The Drummonds, finds its spark in a sublime musical friendship begun over a decade ago. This tight-knit trio, comprised of Billy and Ray Drummond and Renee Rosnes, has served as a major source of inspiration and support to countless jazz soloists in a myriad of live and recording situations.

For more than thirty-five years, Toshiko Akiyoshi has reigned as one of the top composer-arrangers and ensemble leaders in the jazz world. Born in China, she moved to Japan in her teens right after World War Two, and as a pianist-composer, later became a major participant in Tokyo's lively music scene in the mid-1950s. She emigrated to the U. S. in 1956 and studied at Berklee, married alto saxophonist Charlie Mariano, and led groups with him for several years. She also collaborated with Charles Mingus on the bassist's infamous 1962 Town Hall Concert. Married to tenor saxophone and flute player Lew Tabackin since 1970, Akiyoshi settled in Los Angeles and formed a big band there that, in many ways, reflected the deep influence of Ellington and Mingus while incorporating other musical styles as well. Akiyoshi and Tabackin relocated to New York in 1982, and have managed to maintain their big band/jazz orchestra through an era when large ensemble jazz suffered hard times. Today Akiyoshi's big band continues to be a huge concert draw around the world and can be found in residency at Birdland on Monday nights in Manhattan.

As Akiyoshi explains in a liner note that accompanies Hiroshima--Rising From the Abyss, this particular musical project was first suggested to her by a Buddhist priest and jazz fan who hailed from the first city on which the atomic bomb was dropped in 1945. Akiyoshi has visited Japan thematically often throughout her career, but she didn't feel she could compose anything about this horrific moment in history, she writes, until she saw a photograph taken at the time of a young woman emerging from a bomb shelter “with beautiful eyes full of hope."

Premiered and recorded at a Hiroshima concert hall on the August 6th anniversary of the fateful, unforgettable day, Hiroshima--Rising From the Abyss is comprised of three songs, including an intricately arranged suite-like centerpiece composed especially for the performance. Needless to say, all of the music here is evocative and suffused with both the force of history and the power of hope. Leading an 18-piece jazz orchestra from her piano chair, Akiyoshi and Tabackin swing in grand fashion (and appropriately enough: Swing was the most popular musical sub-genre during the 1940s) through “Long Yellow Road," the title track of their 1974 big band album, before embarking on the ambitious 42-minute-long “Hiroshima Rising From the Abyss."

The first part of the suite, “Futility," has Tabackin riding over a superbly rocking rhythm section with confidence, sounding very much like Ben Webster, and then trumpeter Jim Rotondi and alto saxman Dave Pietro jump in and take solos. Drummer George Kawaguchi introduces a raucous group improvisational section before “Survivor Tales," the second part of the suite, commences with a recitation and haunting Korean flute intonations. A trumpet valedictory for John Eckert and Tabackin's flute intertwine with tenor sax and trombone to form a New Orleans-style stomp, until the third section, “Hope," concludes the composition with a soulful saxophone part in an engaging midtempo swing. Yet another title track (from a 1986 album), “Wishing Peace," completes the bookending of the suite, with Tabackin adroitly complementing a dreamy horn arrangement, again on flute.

Taken as a whole, Akiyoshi's Hiroshima--Rising From the Abyss represents a dimension of big band orchestration rarely experienced these days, and Lew Tabackin continues to shine as one of jazz's finest (though sadly under-appreciated) improvisers. Their momentous work here on this CD may very well be a high point in their many years of collaboration together.

Founded on friendship and musical serendipity, The Drummonds today are the quintessence of piano trio virtuosity and imagination. The three musical artists--Renee Rosnes, Ray Drummond and Billy Drummond--were drawn together in 1990 when they were on the regular lineup at Bradley's, the much-loved night spot in Manhattan that unfortunately closed its doors for good several years ago. Ray (the bassist) and Billy (the drummer, and married to Renee) shared the last name that is the group's moniker, as well as a deeply intuitive style of playing that caused them to be matched together as a rhythm section on many a night, but otherwise are unrelated. It didn't take long, however, to discover that, as a trio with Renee, they had an unmistakable chemistry on the bandstand, and over the years they've played together as often as possible. 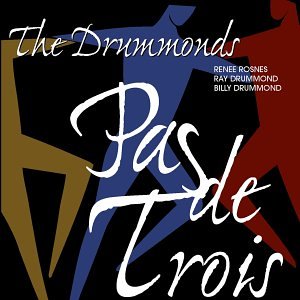 If The Drummonds make it all sound so effortless and yet exquisitely pleasing on Pas De Trois, then chalk it up to experience. Ray, the elder of the three, began his jazz career in San Francisco, working with Bobby Hutcherson among others, before moving to New York in 1977 and beginning long associations with scores of jazz luminaries, including Betty Carter, Stan Getz and Milt Jackson, along with relative newcomers like Wynton Marsalis and Steve Wilson. Ray also leads three other bands away from The Drummonds, amazingly enough--a sextet called Excursion, a quartet and a duo, One to One, with Bill Mays. As for Renee, a Vancouver native, and Billy, originally from Newport News, Virginia, they first drew notice back in the 1980s as members of the “Young Lions" group Out of the Blue. Since then, Billy has established himself as one of the premier first-call jazz drummers on the planet, his six different drum kits all packed in their travel cases and ready to go. Renee has garnered accolades galore in the meantime. Besides spending a year on tour with Wayne Shorter, Rosnes regularly accompanied two late legends, Joe Henderson and J. J. Johnson, for long stretches, and today she maintains a seat in the Carnegie Hall Jazz Orchestra and bands led by James Moody and Bobby Hutcherson. Her substantial recording career includes eight albums as a leader on Blue Note Records, most notably last year's daring Life on Earth.

The purpose of Pas De Trois, The Drummonds say, was to re-create a nightclub atmosphere in the studio and feature a heavy dose of the sort of standards that would typically make up a set by Bill Evans in his heyday. (One version of this album was initially released in Japan several months ago, in fact, and titled Letter to Evans.) The Drummonds put their sparkle to Evans favorites such as “Haunted Heart," “Emily" and “I Hear a Rhapsody," asserting their individual artistry and unique interplay in a familiar context, sure, but with magnificent results. The title track, a waltz penned by Paul Arslainian, is an eight-minute-plus tour de force that boasts of some of the choicest trio playing around. Put some ice in a glass and close your eyes, the songs on this collection seems to suggest to listeners, because the spirit and magical camaraderie of Bradley's (or any other great nightclub) lives on whenever The Drummonds count one off.