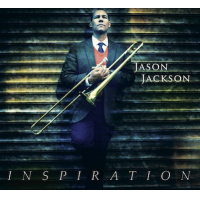 slideshow
With the release of Inspiration, the second CD to appear under his name and first new one in 13 years, Jason Jackson emerges as a jazz master whose gifts as a composer and arranger match his virtuosity as a trombonist. His inspired combination of horns, strings, and rhythm is quite unlike anything else being recorded these days. The new disc will be released October 14 by Jack & Hill Music (the label venture he operates with his vocalist wife Rosena Hill Jackson) in association with Planet Arts.

Ten years in the making, Inspiration finds Jackson at the helm of full orchestras made up of rhythm, horn, and string sections. As one of the most respected and in-demand trombone players in New York City since settling there 21 years ago, Jackson was able to call on the services of friends and colleagues such as trumpeters Roy Hargrove and Terell Stafford, trombonist Slide Hampton, clarinetist Evan Christopher, saxophonists Pete Christlieb, Dick Oatts, Rich Perry, and Steve Wilson, pianists Roger Jones II and Michael Melvoin, bassist Rufus Reid, drummers John Guerin and Dennis Mackrel, and percussionist Roger Squitero. Of the ten selections on the CD, six of the arrangements were written by Jackson, one by his friend and former teacher Slide Hampton, one by Christopher, and two by the prolific motion picture composer Eddie Karam.

The remarkably varied program on Inspiration opens with the lively samba- and montuno-driven original “Brazilian Bop,” which came out of Jackson’s travels to Brazil with Ray Charles and the two years he spent in Dominican salsa singer Raulin Rosendo’s band. The standards “Spring Is Here” and “Tenderly” showcase Jackson as a supremely lyrical interpreter of ballads in the tradition of such trombone predecessors as Tommy Dorsey and Urbie Green, both of whom he credits as influences, although he cites J. J. Johnson, his onetime instructor at the Oberlin Conservatory of Music, as his all-time favorite.

Other standouts are the swinging Jackson composition “Wake Up Election 2000” for full orchestra, with solos by Wilson (on alto), Stafford, and the leader; Vernon Duke’s “April in Paris,” for which Jackson’s arrangement combines polyrhythmic swing with an Afro-Cuban feel; and “The Spot,” the trombonist’s swinging salute to jam sessions. “It’s where musicians have sort of a social gathering; otherwise we’re working all the time,” he says. “It’s where we go to play and hone our skills and be inspired by each other’s ideas.”

Jason Jackson was born on September 11, 1971, in San Bernardino, California, to an Italian-American mother and an African-American father, both of whom were jazz fans. While growing up in nearby Yucaipa, he picked up a trombone that belonged to his uncle and blew into it. “They were so amazed that I got a sound out of it, they gave it to me,” he says of his family. He went on to play the instrument in the jazz band at Yucaipa Intermediate School. “I knew within my first year that this was what I wanted to do,” he remembers.

In 1989, after graduating from Idyllwild preparatory school, he enrolled at Oberlin in Ohio, where for one semester his instructor was modern jazz trombone pioneer J.J. Johnson. “I couldn’t believe I was sitting next to my idol,” Jackson recalls. “He was such a force in my life and trombone playing for so many years.”

Jackson received a Bachelor of Music Degree from Oberlin in 1993 before relocating to New York to study privately with Slide Hampton on an NEA grant and to work on a Master’s Degree in Jazz and Commercial Music at the Manhattan School of Music, where his trombone instructors included Steve Turre and Jack Gale.

In addition to the two years he spent touring the world with Ray Charles not long after his arrival, he has been the lead trombonist in the Dizzy Gillespie All-Star Big Band for the past decade and also currently plays that part in orchestras led by Roy Hargrove and Charles Tolliver. And on Mondays, his off-nights from playing in the pit bands of such Tony Award-winning Broadway productions as The Color Purple, Wonderful Town, Nice Work If You Can Get It, and presently Motown the Musical, he has been a member for the past 10 years of the Grammy Award-winning Vanguard Jazz Orchestra at the Village Vanguard. He also teaches part-time at City College of New York, performs about once per month in a group he co-leads with his wife, and even finds time to occasionally sit in at jam sessions.

Jackson will be appearing 8/26-31 at the Jazz Standard, NYC, as lead trombonist and featured soloist with the Ron Carter Big Band, and is touring Japan 10/27-11/2 with the Vanguard Jazz Orchestra. His own Jason Jackson Orchestra, featuring music from Inspiration, will perform a CD release show at 11/29 at Smalls, NYC. “I needed to go ahead and go for it,” Jackson says of his exciting new role as leader.