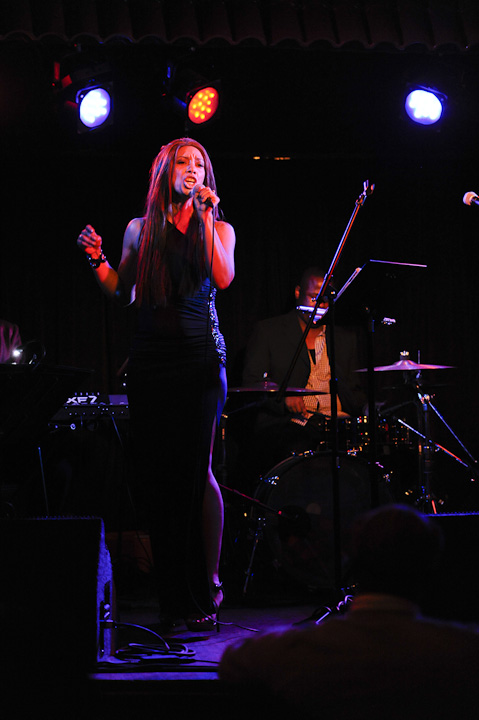 Accompanied by the All-Star Orchestra, Kaylene Peoples hosted the show, introduced the special guests, and entertained the audience with short jazz anecdotes between sets. STAR TREK: DEEP SPACE 9 actress Chase Masterson sang a heartfelt selection of jazz torch songs that were well appreciated by the audience; and introduced saxophone legend Dave Pell, whose jazz career spans over 70 years. Dave Pell, 87 years old, treated the audience to three masterfully performed saxophone solos and stories about jazz history; including how he got one of Lester Young’s saxophones. Jazz crooner Jay Jackson wowed the audience with an impromptu guest performance.

The All-Star Orchestra who accompanied the soloists showcased their jazz mastery throughout the evening. Bassist Del Atkins, music director for AMERICA’S GOT TALENT and AMERICAN IDOL, jazz pianist and composer Kevin Flournoy, and drummer Cory Mason, whose past performances include concerts with John Legend, Stevie Wonder, and Ronnie Laws.

“It was a great night, a very successful launch,” said Kaylene Peoples, creator of the Indie Hotspot Silver Lake Jazz Series. “The support for the series has been amazing, and I am impressed with the caliber of people that came out to support the show tonight, it sets a high tone for the quality of jazz performances we are bringing to Silver Lake.” The monthly jazz series has an impressive line-up, with future performances to include Jay Jackson, Bobby Lyle, as well as a number of promising rising talent.

Indie Hotspot founder Kaylene Peoples chose the El Cid historic landmark location for its central location near Sunset Junction, the heart of Silver Lake’s music scene. “Silver Lake has an established track record for promoting ‘indie’ talent and El Cid has been very supportive about bringing jazz into this community. This is a great start of what I hope will be a great partnership,” states Kaylene Peoples.

“We played in many clubs, had a lot of fun with the clubs more than anything . . . this here looks sensational,” said saxophonist Dave Pell about the El Cid venue. Many guests discovered the El Cid venue for the first time, and enjoyed the intimate setting and atmosphere; one of them likening it to New York’s legendary jazz venue the Village Vanguard. Guests enjoyed tapas and cocktails on the patio and throughout the evening, including a new signature cocktail made with Laura Anns Jams.