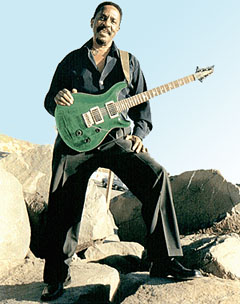 NEW YORK, N.Y. — Although Ike Turner is often credited with recording the first rock ‘n’ roll song with 1951’s “Rocket 88,” his career took a leap when he met Anna Mae Bullock and re-named her Tina Turner. Their first collaboration was “A Fool in Love,” released in 1960 on Sue Records, and the two later hooked up with producer Phil Spector, resulting in the 1966 wall-of-sound smash “River Deep Mountain High.” 1969 found Ike and Tina returning to their blues roots with a pair of albums that Ike leased to Bob Krasnow’s Blue Thumb Records — The Hunter and Outta Season. The two albums will be combined to form an 18-song single-CD reissue titled Ike & Tina Turner Sing the Blues as part of Acrobat Music’s Premier Series. Street date for the collection is October 21.

The Hunter and Outta Season were recorded when Ike, fed up with pressures from the labels such as Sue to create new product every year, launched his own Pompeii label, proceeding to release recordings by the Ikettes as well as by himself and Tina. The albums he leased to Blue Thumb in ’69 were along the last independent projects Ike would undertake before signing to United Artists, where he and Tina recorded “Proud Mary” and several key long-players.

Both Blue Thumb albums were blues-oriented, and showcased Ike’s superlative guitar work — which had taken a back seat during the early Ike & Tina years — as well as Tina’s stunning vocals. The songs were largely blues standards but there were a couple of original numbers. “Bold Soul Sister,” for instance, was a very un-bluesy track and was a sizeable hit for the duo, as were Tina’s interpretations of Albert King’s “The Hunter” (equally well known for the version cut by the British band Free) and her testifying version of Otis Redding’s “I’ve Been Loving You Too Long,” a standard in the Ike & Tina Revue’s live ‘70s shows.

The subsequent global success of Tina Turner in the ‘80s and ‘90s is well documented, and she remains one of the enduring stars of the soul and pop scenes. Ike Turner’s contribution to the development of blues and rock has been sadly underrated due in part to the revelations about his relationship with Tina, but this situation has changed somewhat since his death in December 2007. His influence as a discoverer and developer of talent was considerable, and his own qualities as a performer are admirably showcased in this collection.

Acrobat is a UK-based record label specializing in collectors’ and reissue CDs across just about every genre of music. In 2007, Acrobat Music Group purchased the Kruger Organisation catalog, a library of more than 22,000 original tracks by Frank Sinatra, Miles Davis, Billie Holiday and Nina Simone, among scores of others. Launching its U.S. label out of New York this October 21, Acrobat will establish its presence as a premier independent reissue label in the U.S. through its distribution with TVT Distribution.