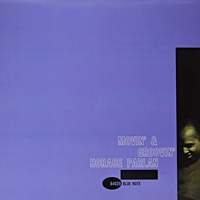 slideshow
By now, it's no secret that Bill Evans is my favorite pianist. In second place would have to be Horace Parlan. Born in Pittsburgh, Parlan at a young age contracted polio, which left his right hand partly disabled and disfigured. Two of the fingers in his right hand were out of commission. As a result, his left hand did double duty delivering heavy harmony and bass treatment while the pinky, pointer and thumb of his right hand handled melody improvisation. Parlan relocated to Denmark in 1972.

Despite the diminished use of one hand's digits, Parlan became a fine hard-bop keyboard accompanists and a magnificent trio leader and solo player. The best place to start with Parlan is his first leadership album—Movin' and Groovin'. Recorded in February 1960 for Blue Note, Parlan's trio consisted of Parlan on piano, bassist Sam Jones and drummer Al Harewood.

As much as I love Red Garland, I give Parlan the edge when it comes to taste and volume of superb material over the course of his career. He had a lovely sense of swing, and his chord voicings were sensational. All he seemed to care about was knocking out listeners. There was no idling or just getting it over with. Parlan was a sculptor, carefully kneading and shaping every song he played.

The songs on this album are C Jam Blues, On Green Dolphin Street, Up in Cynthia's Room, Lady Bird, Bags', Groove, Stella by Starlight, There Is No Greater Love and It Could Happen to You. All are sensationally executed. Even songs you may feel you've heard enough of, like C Jam Blues and Bags' Groove, are re-invented by Parlan's groovy bluesy attack.

Parlan began his recording career in 1957 with Charles Mingus and then moved on to Lou Donaldson in 1959 before recording Movin' and Groovin'. I came to Parlan in college after picking up Dexter Gordon's Doin' Allright (Blue Note) and hearing Society Red.

Parlan so knocked me out on there that I began collecting. Everything I purchased by Parlan had his ambitious playing style. Best of all are those stylistic tricks of his that pop up often. These include building tension with chords in his left hand while swinging notes with his right, resolving with cascading block chords. Or ascending scales with three-finger modal riffs and soul-jazz chords clustered together.

I could spend the next 30 days writing about Parlan's excellent albums as a sideman and as a leader, but I wouldn't dare. There are too many others to write about. But do yourself a favor. Explore the pianist yourself. Movin' and Groovin' is a perfect gateway. And dig Jones and Harewood. Jones thumps it out and Harewood is all over the snare. Perfect jazz is a joyous thing.

JazzWax clips: These two are absolute knockouts. See if you can sit still when Parlan is on a roll. I find it impossible:

Here's Lady Bird (crank this up; five minutes of a sterling trio in action)...