SOURCE: ALL ABOUT JAZZ
November 17, 2007
Sign in to view read count 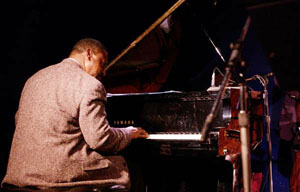 Harlem-born and Queens-raised, jazz pianist Onaje Allan Gumbs has enjoyed a career as first-call sideman, valued arranger and composer, producer, bandleader, and recording artist. Many will remember his vital contributions to such Woody Shaw classics as Moontrane and Rosewood, to which he lent his composing and arranging skills. Still others will recall his work as producer and arranger for vocal dates led by Marlena Shaw; or perhaps his sideman contributions to dates with an impressive range of artists - from Kenny Burrell and Nat Adderley, to Ronald Shannon Jackson, to Jonathan Butler. Onaje's soundtrack writing includes Danny Glover's Showtime film Override, and his composition “Dare to Dream" was a theme for a Panasonic awards presentation. In 2006, Onaje was nominated for an NAACP Image Award as Outstanding Jazz Artist. His most recent album, Sack Full of Dreams, has garnered critical acclaim and proven to be a jazz radio favorite, and features the vocal work of esteemed film and stage actor Obba Babatunde.

Hotep Idris Galeta was born in Crawford, Cape Town and grew up exposed to the rich music culture in and around the city. After meeting Abdullah Ibrahim, then known as Dollar Brand, at a high school jazz concert, the two became close friends and Brand became Hotep's mentor. Hotep, or as he was known in the 50's, Cecil Barnard, went on to establish himself as one of the young emerging pianists on the Cape Town Jazz scene. Hotep left South Africa in 1961 for London and then New York, remaining in exile for thirty years, during which he worked with jazz figures such as Jackie McLean, Woody Shaw, Elvin Jones, and Archie Shepp. He was appointed lecturer in Jazz studies to the University of Hartford's Hartt College of Music in 1985. This position continued until his return to South Africa in 1991. In 2003, Hotep released the critically acclaimed solo album Malay Tone Poem, recorded with some of South Africa's rising jazz stars including Marcus Wyatt and Zim Ngqawana. Hotep currently manages the Resource Centre at Artscape Performing Arts Theatre Complex in Cape Town, South Africa, and also co-ordinates the Jazz Performance and Community Outreach Jazz Education programs there, and also teaches at Fort Hare University.