Highlights In Jazz Presents The Millennials Meet The Masters on Thursday, March 22, 2018 8pm at the Tribeca Performing Arts Center 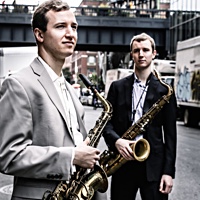 For Highlights In Jazz founder Jack Kleinsinger, variety is the spice of concert production. He delights in bringing together musicians from different generations, genres and backgrounds. Kleinsinger aims for unusual pairings, treating the audience to something they’re not likely to hear in a club. “None of my lineups involve a working group. All-star jams are my stock-in-trade, and have been for 40-some-odd years,” he notes. While Kleinsinger has a roster of regulars he’s brought in since the early days of the Highlights In Jazz series, “We’ve made an effort to expand and bring in as many young artists as we can. There are so many wonderful players out there, it’s amazing.”

Scheduled to appear at the upcoming “The Millennials Meet The Masters” concert are:

Saxophonists/clarinetists Peter and Will Anderson: Hailed by The New York Times, The Wall Street Journal and other august publications for their remarkable virtuosity, the identical Anderson twins began steeping themselves in classic jazz while still in elementary school. They absorbed the styles and sounds of Benny Goodman, Sidney Bechet, Louis Armstrong, Nat King Cole, Frank Sinatra, Ella Fitzgerald and Count Basie, and cite Duke Ellington and Charlie Parker as early influences. Since moving to the Big Apple, they’ve played with the likes of Wynton Marsalis, Jimmy Heath, the Village Vanguard Orchestra, and Wycliffe Gordon. In addition to releasing two albums as leaders, the Juilliard-trained twosome have appeared off-Broadway celebrating the music of Artie Shaw and the Dorsey Brothers.

Pianist Tardo Hammer: This native son of Queens, NY, has been part of the Big Apple jazz scene for almost four decades. He’s been the pianist of choice for Art Farmer, Annie Ross, Lionel Hampton, Clifford Jordan, Abbey Lincoln, Jon Hendricks and a host of other giants of the genre. Besides being an in-demand sideman and respected educator, Tardo Hammer has released a half dozen well-received albums as a leader.

Drummer Jimmy Cobb: The fact the he played on the timeless Miles Davis album Kind of Blue and Coltrane’s iconic Giant Steps would have been enough to guarantee Jimmy Cobb a space in the jazz pantheon. And then there was his work with Cannonball Adderley, Wayne Shorter, Dinah Washington, Wes Montgomery, and his own bands, such as Cobb’s Mob. It’s no exaggeration to call Jimmy Cobb one of jazz’s reigning elder statesmen, and at age 89 he’s showing no signs of slowing down. He continues to teach master classes across the country and around the world. The veteran drummer gigs regularly, and he keeps sounding better and better, according to more than one critic.

Trumpeter Dominick Farinacci: A 21st century renaissance man, trumpeter Farinacci cites Louis Armstrong, Charlie Shavers and Clifford Brown among his earliest influences. Dominick has been a global ambassador for Jazz at Lincoln Center, explored the connection of music and wellness, delivered a TED talk, raised funds to help communities devastated by natural disasters, and garnered numerous awards and top honors at various trumpet competitions. This versatile musician is equally at home playing a Horace Silver jazz standard, a Tom Waits tune, or delving into material by the Gipsy Kings. Besides playing with the likes of Wynton Marsalis, Mulgrew Miller, Kenny Barron, Ron Carter, Joe Lovano, Jimmy Heath and Benny Golson, Dominick has released about a dozen recordings as a leader

Trombonist Steve Turre: You may recognize Bay Area-born Steve Turre from his long tenure in the Saturday Night Live band, but that’s only part of his story. Steve spent a year on the road with Ray Charles; was mentored by Woody Shaw, who brought him into Art Blakey’s Jazz Messengers, and went on to play with Dizzy Gillespie, Pharoah Sanders, J.J. Johnson, Van Morrison, Max Roach, Tito Puente and many others across the musical spectrum. A stint with Rahsaan Roland Kirk along the way introduced Steve to the musical possibilities of playing seashells, creating melodies that equal the natural instruments in beauty. Steve has recorded as a leader with strings, shells, and in numerous other configurations, including his recent well-received album Colors for the Masters.

Bassist Buster Williams: An in-demand bassist since his teens, it might take less time to list the jazz giants Buster hasn’t played with. His first gigs were with Jimmy Heath, Gene Ammons and Sonny Stitt, followed by stints with Miles Davis, Herbie Hancock, McCoy Tyner, Chet Baker, Geri Allen, Dexter Gordon, Art Blakey, Stan Getz and Mary Lou Williams, and a breath-taking array of others. Beloved by singers, Buster worked with Nancy Wilson for close to a decade, plus other greats including Betty Carter, Shirley Horn, Carmen McRae, Nnenna Freelon, Etta James, and Roseanna Vitro, to name a few. Buster has also fronted his own band throughout his career, recording more than a dozen albums as a leader.

Listeners will want to keep an ear out for a special surprise guest, another Highlights In Jazz trademark. Spontaneity is a hallmark of jazz, and this concert series is no exception. The surprise guests at the very first Highlights In Jazz concert were guitarist Gene Bertoncini and clarinetist Phil Bodner. Sometimes special guests are added at the last minute: “Paquito D’Rivera showed up in the audience, and I gave him cab fare to go home to get his horn at intermission so he could sit in with the band,” Kleinsinger recalls with a laugh.

To paraphrase Shakespeare, this is the stuff that jazz fans’ dreams are made of.

All lineups are subject to change without notice.

You won’t want to miss a single concert of the 2018 season of Highlights In Jazz!

Don’t miss any of the stellar Season 46 Highlights In Jazz events!

Tickets can be purchased in advance at the box office. You are now able to use your credit card at the Tribeca PAC Box Office located on 199 Chambers Street, or by calling (212) 220-1460 and now online.