You won’t want to miss the 2018 season opener of Highlights In Jazz now featuring the Bucky Pizzarelli Trio and vocalist Allan Harris. 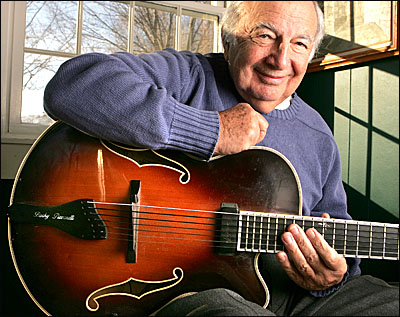 Producer Jack Kleinsinger and the entire Highlights In Jazz family joins the rest of the jazz world in mourning the late Kevin Mahogany, who passed away December 17, 2017. He was originally scheduled to appear at the season kickoff concert.

Renowned singer Allan Harris has joined the lineup for the first concert of the season, featuring the Bucky Pizzarelli Trio.

At 92 years old, guitar virtuoso Bucky Pizzarelli has had a long and fabled career playing with internationally renowned favorites across the generations, from Benny Goodman to Paul McCartney. He also worked with the likes of George Barnes, Stephane Grappelli, Frank Sinatra, the Tonight Show band, and countless others, and enjoyed a long reign among the most in- demand studio musicians.

Guitarist Bucky Pizzarelli has been part of the Highlights In Jazz series from the get-go: Not only did this consummate pro perform at the very first Highlights In Jazz concert, Bucky actually encouraged Jack Kleinsinger to get into producing events in the first place.

In the early 1970s, Kleinsinger, a former assistant attorney general of the State of New York, practiced law all day, then spent many an evening at jazz clubs. “That’s how I calmed down at the end of the day,” Jack notes. Bucky advised him to “rent a hall, put on a concert, and get it out of your system,” the producer recalls. Producing his first Highlights In Jazz show had the opposite effect on him, and 46 years later, he and Bucky are both still at it. Not only was Bucky Pizzarelli the first featured artist, “He’s one of the artists I’ve presented most often,” Jack declares.

Whether the guitarist is focusing on the music of Jerome Kern or Duke Ellington, paying tribute to six-string legend Freddie Green or collaborating with members of his talented family, such as son John Pizzarelli, listeners can count on Bucky Pizzarelli to give his all each and every time. He also radiates cool, whether he’s describing showing up for a recording date with Miles Davis or playing ukulele for Tiny Tim’s wedding on The Tonight Show, it’s all in a day’s work for this seasoned guitar star, who has called playing for an audience “the ultimate pleasure.”

Joining the guitar maestro on stage at 2018’s Highlights In Jazz season opener will be fellow guitarist Russell Malone, a six- string master in his own right. Russell credits Wes Montgomery and George Benson as early influences, but has such a distinctive style you’d never mistake him for anyone else. Russell has released more than a dozen albums as a leader, including 2017’s highly praised Time for the Dancers. Russell has proved time and again that he knows his way around standards and originals. Besides fronting his own bands, the versatile guitarist has performed with Ron Carter, Sonny Rollins, Dianne Reeves and other jazz icons.

Singer/guitarist/composer Allan Harris has joined the lineup for this gala event. The talented New Yorker has 11 albums under his belt, including the recently released Nobody’s Gonna Love You Better (Black Jukebox Redux), a follow-up to his brilliant 2015 release Black Radio Jukebox. With these critically acclaimed and popular recordings, Allan presents the music he fell in love with growing up in Brooklyn, and while exploring the rich Harlem cultural scene. The exciting blend of swinging jazz, R&B, ballads, rock, blues, and Brazilian music was the soundtrack of his youth, and it continues to resonate with listeners today. His repertoire includes original compositions, classics from the Great American Songbook, and songs made famous by a such varied musical icons as Nat King Cole, Jimi Hendrix and Ray Charles. Regardless of the source of the song, Allan has a knack of stamping each with his signature sound. He appears at Highlights In Jazz fresh from an Off-Broadway run of Cross that River, the rarely told saga of black cowboys in the American West, for which Allan co-wrote the book and composed the music.

As with all Highlights In Jazz concerts, the 46th anniversary gala will include a surprise special guest. At least one or two top- flight jazz stars are scheduled for unannounced appearances at each concert in the Highlights In Jazz season. “It’s always a well-kept secret, and it’s always a lot of fun,” producer Jack Kleinsinger notes.

Sometimes the special guests are a surprise even for the producer. The long-running concert series is a favorite among players, so it’s not unusual to see some big names in the audience; some of them head for the stage as they get excited and inspired by what they’re hearing, and make their own musical statement. Plus, there’s an ongoing tradition of musicians who are free for the evening volunteering their services. “Dizzy Gillespie, Stan Getz, Carmen McRae, if they were in town they’d call me and make last-minute arrangements to show up,” Jack recalls.

By car take FDR Drive south to end, through underpass onto West Street, north to Chambers.

Please send a check made payable to: Highlights In Jazz