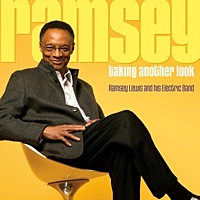 Los Angeles based boutique label Hidden Beach Recordings announced earlier this month the signing of legendary jazz pianist Ramsey Lewis. The three time Grammy® winner who rose to prominence in the early 1970's will release his 80th collection on September 20, 2011 entitled Ramsey, Taking Another Look., On the ten song CD Lewis and his Electric Band breathe new life into many of Lewis' favorite tunes including a new rendition of the Stevie Wonder penned “Living for the City" and a new edit of the original “Sun Goddess" recording featuring Earth, Wind & Fire.

“We are thrilled to have forged this partnership with such a legendary Jazz icon as Ramsey Lewis and his Mapenzi Recording family. From his contemporary Jazz explorations in the seventies all the way to the Orchestral pieces currently featured on PBS, Ramsey Lewis remains as relevant today as ever. We are excited to be bringing this music to market." Stated Steve McKeever, Hidden Beach CEO

“I am glad to join Steve McKeever, a fellow Chicagoan, and the Hidden Beach family to release Ramsey, Taking Another Look. Hidden Beach is known for it's commitment to excellence in music and respect for artistry, a unique position in today's music landscape." Stated Ramsey Lewis.

“Living for the City" will be accompanied by a music video created at Chicago's Tribeca Flashpoint Media Arts Academy, with Film & Broadcast and Recording Arts students taking the lead on production. Featuring an energetic performance by Ramsey Lewis and his Electric Band, the clip celebrates the visual vibrancy of Chicago at night time.

“The idea of the electric quintet came up and having played mostly in an acoustic trio arrangement for twelve-fifteen years, I decided to get together with the guys to see how it felt. The rehearsals went so well that I called in my engineer, Danny Leake and my producer/son, Frayne Lewis to come in and roll tape. I've recorded maybe 65-70 albums, and this album is definitely among the top five."