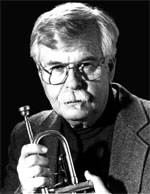 Before he became an educator at Boston's Berklee School of Music, trumpeter Herb Pomeroy briefly led a big band in the late 1950s. The band had a solid, swinging sound, like a steam locomotive going at full tilt. While Maynard Ferguson's band during this period was about the sonic impact of the brass section and frenzied daring of its soloists, Pomeroy's short-lived orchestra specialized in rhythm and round tonality, with an airy emphasis on the reed section. Through deft composing and arranging, Pomeroy managed to combine Count Basie's swing with Duke Ellington's grace, and the result was foot-tapping bliss. Sadly, Pomeroy recorded only three albums with this band. The first was Life Is a Many Splendored Gig, recorded for Roulette in 1957.

Pomeroy throughout the early 1950s was a fixture on the small-jazz scene in Boston. He was often found leading groups at The Stable, and he recorded between 1951 and 1954 with the likes of Charlie Mariano, Jaki Byard, Dick Twardzik, Varty Haroutunian, Serge Chaloff and Ray Santisi (even Prestige producer Ira Gitler wound up on a recording playing bells). Pomeroy's groups even recorded in Boston, not New York. In 1954, Pomeroy toured with Stan Kenton's band, the one with Lennie Niehaus, Charlie Mariano, Bill Holman, Jack Montrose and Boots Mussulli in the reed section.

Pomeroy didn't have Ferguson's show-biz flair on the trumpet nor was he a household jazz name in 1955. Pomeroy had spent much of his career up until this point in Boston. Though he had played with Charlie Parker at Boston's Hi-Hat and Storyville clubs in 1953, Pomeroy remained out of the limelight. The same was true for many of the guys in his big band. A good percentage were family men who worked day jobs, which made putting together a band for steady rehearsals, gigs, touring and recording tough. One musician in the band worked in a bank, one sold women's shoes, one worked as a maintenance worker and another was studying to be a dentist. Paying rent on a big band musician's salary wasn't what it had been 10 years earlier. [Pictured: Herb Pomeroy with Duke Ellington in 1957]

After Pomeroy assembled his working orchestra in 1955, the band stuck close to home and day jobs. The band worked steadily at The Stable in Boston--first one night a week, then two. After two years of gigs and relentless writing and arranging by Pomeroy, the band was ready, and the orchestra traveled to New York to record for Roulette.

Every single track on the Life Is a Many Splendored Gig is a knockout. There's no filler here, no padding for extended solos. This is largely an old-school band with a sound unlike any other of its time. There's plenty of fire, but the passion is collective, and solos are smoothly executed rather than fuse-burners.

Most of the tracks on the album are Pomeroy originals. Blue Grass, Wolafunt's Lament and Jack Sprat are swingers while Feather Merchant, another swinger, comes out of the Basie book. Jaki Byard's Aluminum Baby is pure Ellington, while Bob Freedman's Theme for Terry rests on a “Four Brothers" reed sound. No One Will Room With Me probably comes as close to the Ferguson sound as any of the tracks on the album. There are jazz standards as well. It's Sand Man features a fine Sims solo while Tadd Dameron's Our Delight breaks from the gate on the opening notes and keeps on going. Big Man is a mid-tempo tune that opens with a Latin beat and resolves into a walking jazz tempo. The album closes with Less Talk, another rip-roaring original.

The beauty of this band is how Pomeroy used the reeds to frame melodies and solos. Pomeroy's trumpet style also should not be overlooked. His open-horn solos were firm and fluttery, without sounding studio or hysterical on the high end. They were pretty, workmanlike and conscious that listeners needed to be delighted. For Pomeroy, taste and craftsmanship mattered. That mantra remained with him throughout his career, right up until his death in 2008.

JazzWax note: Chuck Stewart photographed the cover of Life Is a Many Splendored Gig. To the oddball album-cover sleuth, the image on first glance would appear to be knickknacks from a surrealist's garage sale. But when you know the back story to the album, as related above, you realize that the stuff displayed is an inside joke. What you see are items that represent the bandmembers' diverse daytime occupations, from teacher and bank teller (that's cash in the middle) to shoe salesman (there's a shoehorn in there) and dentist (note the false teeth at the bottom center!).

JazzWax tracks: Unfortunately Herb Pomeroy's Life Is a Many Splendored Gig is out of print on CD and is going for about $100 here. But it's likely available as a download at many online e-retailers.

JazzWax clip: Here's Herb Pomeroy in 2003 playing It Could Happen to You. Dig his round, understated style on the horn...