By
February 1, 2011
Sign in to view read count
"Tempi con Variazioni is a toast to the art of music—in all its diversity of styles, time periods and genres..."

Violin virtuoso/composer Helmut Lipsky's Melosphere CD Tempi con Variazioni (Chestnut Hall Music) garnered the prestigious Conseil Québécois de la Musique (CQM- Quebec Music Council) Prix Opus (Opus Prize) for Album of the Year in the World Music category. The fourteenth annual gala of the Music Council, held in Montreal on January 31, 2011, celebrated the best musical achievements in the province of Quebec, rewarding excellence in the production and performance of concert music. Helmut Lipsky and his Melosphere ensemble were finalists for the same award for Best Concert of the Year in 2007.

Helmut Lipsky has already been dubbed “the most cosmopolitan of all musicians...a true eclectic..."(Globe & Mail). His fifth solo CD takes Melosphere, his ensemble of superb Canadian and European musicians, on a bold and fascinating musical journey across genres, continents, cultures and musical styles. It creates a space where jazz, tango, latin rhythm, gypsy, rock and classical music interact to create a vibrant and eclectic sound. “Lipsky has collaborated with some of his European associates to bring to life his vivid impressionistic images, mythological depictions or dramatic, even passionate, human encounters," wrote Don Williams of JazzReview. Most of the songs on the album were written by Lipsky, and recorded live at Kingston's St. George's Cathedral and at Montreal's Chapelle historique du Bon-Pasteur.

“Tempi con Variazioni," the CD's title work, is a voyage through five centuries of musical history. The journey is that of a song, an ancient incantation, first intoned in an old church, evolving through a variety of musical styles to culminate in a contemporary, jazzy evocation. “It is a dreamy, adventurous stroll through the space and time of the 'wonderland' of music, under the spell of Suzie's enchanting, magical voice," reflects Lipsky.

The album also features Lipsky's interpretations of two of Astor Piazzolla's best known compositions; a contemporary arrangement of Schubert's An die Musik; a live rendition of Mother Earth's Lament (written for the 2008 World Energy Conference); Fuyu—inspired and dedicated to Lipsky's wife, and Rêverie—Song for the clavichord to poetry by Elizabeth Bishop.

Helmut Lipsky is a prolific musician, classically trained and well-versed in a mix of musical languages from jazz to ethnic, tango to contemporary and beyond. Born in Germany, he grew up in Switzerland and studied violin in NY with the great masters, including Ivan Galamian and Itzhak Perlman. He moved to Montreal in 1980 and established his first Melosphere ensemble, solidifying a very personal, identifiable musical style as composer, arranger, performer and bandleader.

Over the years, Lipsky opened for jazz legends Dave Brubeck, Stéphane Grappelli and Toots Thielemans. Lipsky has written, interpreted and produced music for theatre, cinema, multimedia installations, television and special events worldwide, and with his various ensembles (Melosphere, Tricycle, Sonos, Unclassified, Moontide), he performed his genre-defying original fusion at some of the world's most prestigious venues and festivals, including the Montreux International Jazz Festival in Switzerland. He has collaborated and performed with some of the world's leading musicians, among them Andreas Vollenweider, David Darling, Gerhard Schöne, Butch Morris, George Gruntz, and with top Canadian musicians Gilles Vigneault, Karen Young, James Gelfand, Michel Donato and Claude Léveillé.

Helmut Lipsky's critically-acclaimed albums have been released on CBC's Jazzimage, World Chart Records, Eclectra, Buschfunk, Pavane and Amplitude. Most of his albums are available at Amazon.com. His 1999 Moontide was nominated for a Felix Award (Best Album in World Music). Montreal's leading French daily, La Presse, noted: “if there exists a “Red Violin" of the Blue Note, it would without any doubt belong to Helmut Lipsky." His 2004 Buschfunk recording with German ensemble L'Art de passage, titled Au parfum de tango, was praised as “music that connects immediately and strongly with its listeners&#151arising from the highest levels of the intellect that affects the deepest recesses of the heart." (Jazzreview 2005). Lipsky's 1996 Tricycle, with Canadian jazz musicians James Gelfand and Michel Donato (Lost Chart Records), was also nominated for the Felix Award as Best Jazz Album, and praised by Jurgen Gothe of CBC Radio's Palmarès who wrote: “lush acoustic sound... dreamy and thoroughly satisfying."

Lipsky has received numerous recognitions and awards including the Order of French Music and New York's Presidential Scholar Award. He was featured in a BRAVO television concert-documentary (Helmut Lipsky and Friends), and by invitation from Canadian media visionary Moses Znaimer, Lipsky acted as presenter at the prestigious 2005 IdeaCity Conference in Toronto. In addition, Lipsky and his ensemble Melosphere won first prize in the international competition of Jazz à la carte, the organization of French-language radio networks.

Helmut Lipsky holds Master degrees in violin performance from the Swiss Winterthur Conservatory and New York's Brooklyn College Conservatory. He resides in Montreal, Quebec, where he teaches violin and improvisation at the Conservatoire de Musique de Montreal, and jazz violin at Concordia and the University of Montreal. He also conducts master classes in Canada and in Europe.

Recent performances of Helmut Lipsky's music include presentation of his latest CD in concert at the Conservatoire de musique de Montreal (November 13, 2010). Upcoming performances see the artist and his Melosphere ensemble touring Montreal's cultural centres (February 18-27, 2011), and embarking on a European tour (summer of 2011). 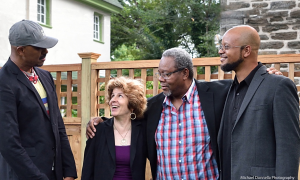