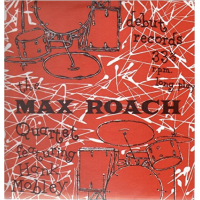 slideshow
It's hard to believe, but drummer Max Roach and tenor saxophonist Hank Mobley recorded just three albums together. In all three cases, Roach was the session leader. On two of the dates, Mobley was teamed with trumpeter Kenny Dorham. Frankly, I was surprised when I discovered their scant output while doing some fast research yesterday. Roach and Mobley are so perfect together as players, I just assumed there were more recordings.

Roach throws down crisp polyrhythms, often at a fast clip, and Mobley is as slippery as an eel when the tempo picks up. To hear them go at it is a joy, and their interactions can be hair-raising. This is especially true when they're trading four bars each on solos.

The three albums are The Max Roach Quartet Featuring Hank Mobley (Debut/1953), Max Roach +4 Plays Charlie Parker (Mercury/1957) and MAX (Argo/1958). All three are uniformly excellent. They are so engaging that I've been consuming all three at once, as if they were a single album. On the first for Debut, Mobley is joined in the front line by trumpeter Idrees Sulieman and alto saxophonist Gigi Gryce. We hear Mobley in his early recording days against a popping, peppery Roach. On this album, both Roach and Mobley are in sync, so you can hear their jousts and attack distinctly.

On the Charlie Parker tribute album, the material is all gunslinger stuff. Roach and Mobley along with Dorham sound like they're shooting tossed coins out of the air on songs like Ko Ko, Confirmation, Au Privave and Tune Up. MAX has more of a hard bop flavor, especially on Mobley's C.M. and Roach's Four-X.

Despite their brief comet-like encounters, both musicians remain busy throughout the 1950s in their own orbits. Roach formed his +4 quartet while Mobley recorded steadily for Blue Note, which is probably why the pair didn't record together beyond the three albums mentioned. They simply didn't have the time.

JazzWax clips: Here's Hank Mobley in 1953 playing Just One of Those Things...