Fun, frolicsome, musically and harmonically inventive and jamming.. Not since I was blown away by German organist Barbara Dennerlein in the early '90s have I been this whipped up into a frenzy by a female master of this classic instrument. —Jonathan Widran, JW Vibe 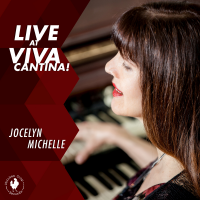 Organist Jocelyn Michelle's newest CD, Live At Viva Cantina (Chicken Coup Records, June 8, 2018), is a toe tapping, festive project of serious music that doesn’t take itself too seriously. Although she’s lived on the Big Island of Hawaii for several years, she decided to record this CD back in Los Angeles, her old stomping ground, where she and her husband, guitarist John Rack, lived and worked for many years. Viva Cantina is a Mexican restaurant and music performance venue with two stages in Burbank. It has the kind of party atmosphere that Jocelyn thought would be a good fit for a live performance with her band.

Live At Viva Cantina is a follow-up to Jocelyn’s acclaimed debut CD, Time To Play. She recorded both CDs for Tony Monaco's Chicken Coup Records. Monaco is a highly respected organist and teacher whom Jocelyn studied with for several years before inviting her to record for his label. Chicken Coup Records, a subsidiary of Summit Records, features some of the finest B3 players around today.

Jocelyn arranged all the tunes on this project and brought on board players based in Hawaii and Los Angeles. The Hawaiian component of her band includes saxophonist Bill Noble, trumpet player Andrea Lindborg, and her husband John Rack. The L.A.-based contingent includes Steve Ehrmann on saxophone, Tony Farrell on trumpet, drummer Sammy K, and Al Person on percussion.

Jocelyn is also a top-notch composer, and the CD includes four of her compositions, including “Englewood Cliffs,” “Oh No, Could I Be in Love,” “A Sister’s Love,” and “Sylvia’s Song.” Those four tunes also appeared on Time To Play, but as with any great jazz band in live performance, their spontaneity creates a brand-new experience of the music.

“Englewood Cliffs” is an homage to the soul jazz sound from the late 1960’s and Rudy van Gelder, who recorded some of the most the most important albums in the history of jazz. His studios were in Englewood Cliffs, New Jersey. Jocelyn also wrote the lyrics to “Oh No, Could I Be in Love,” sung on this disc by acclaimed vocalist LAURA DICKINSON, whose lilting voice is heard on animation features on the Disney Channel. Dickinson also sings on Jobim’s “One Note Samba,” a song Jocelyn and the band play frequently back in Hawaii.

Jocelyn and the band perform two other songs that appeared on the previous studio album as well, “The Pink Panther Theme,” and “Last Tango in Paris.” Jocelyn, who was inspired by Jack McDuff’s version of “The Pink Panther,” arranged the tune for sax and trumpet, giving it an ultra-hip treatment. “Last Tango in Paris” is Gato Barbieri’s sexy composition from the eponymous movie. Jocelyn adds a funky groove to the piece but keeps its sensual mood. The band keeps the seductive ambience going with “The Look of Love,” the 1967 Burt Bacharach/Hal David song. Jocelyn was particularly inspired by guitarist Bob DeVos’ rendition of the tune.

Jocelyn opens the CD with a swinging version of Carl Perkins’ “Groove Yard,” made famous by the Montgomery Brothers on their 1961 release. “Groovin” is the Young Rascals hit from 1967. Jocelyn arranged it with a relaxed, funky groove.

Live At Viva Cantina is the kind of music you put on to get the party going. Jocelyn is adept at different musical styles, honing her chops on the club circuits on the East and West coasts and Hawaii. Live At Viva Cantina captures the energy, spontaneity, and fun of Jocelyn Michelle’s live performances.

Jocelyn Michelle was born in Florida but raised in New Jersey. Her parents were both musical, her mother was a semi-professional pianist and opera singer, and her father played some trumpet. Jocelyn began piano lessons when she was just 7 years old when her parents discovered that she could already play melodies by ear. She eventually gravitated to guitar and played rock in her teens. She went to the University of Miami School of Music as a Music Merchandising Major for a while and returned to the keyboards when she left school. She had been playing on the club circuit in the Miami area when she met her husband, John Rack, who had his own musical project. Jocelyn joined his band as a keyboard player, and the two went on to become both musical and life partners. They eventually released three CDs together. The couple moved to Los Angeles where they lived for many years, performing with their re-constituted blues band. In 2013, they took a trip to Hawaii, fell in love with the Big Island, and in short order, made Hawaii their permanent home where they play jazz and blues and make occasional trips to the mainland to perform.

Live At Viva Cantina will be available at Amazon, iTunes.