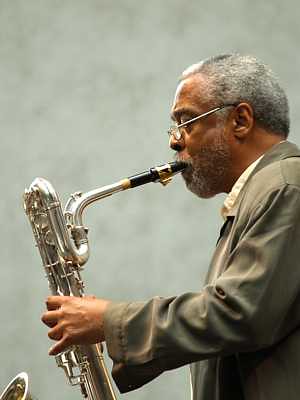 slideshow
Hamiet Bluiett, a native of Brooklyn, IL who co-founded the World Saxophone Quartet and redefined the capabilities of the baritone sax in improvised music, died the morning of Thursday, October 4 at St. Louis University Hospital. He was 78 years old.

Bluiett, whose birthday was September 16, had been gravely ill for some time, and according to a Facebook post from his daughter Anaya, was taken off respiratory support last week.

As a child, Bluiett (pictured) studied piano, trumpet, and clarinet before settling on baritone saxophone at the age of ten. He played his first local gigs in Brooklyn, East St. Louis, and elsewhere as a teenager, and after graduating from high school, served in the Navy band starting in 1961.

Returning to St. Louis after his stint in the Navy, Bluiett helped found the Black Artists Group, leading the BAG big band for two years before the group split up and some members moved to Europe.

Bluiett moved to New York City in 1969, working with Charles Mingus, saxophonist Sam Rivers' big band, and others. Then in December 1976, he played what was supposed to have been a one-off concert in New Orleans with alto saxophonists and former BAG members Julius Hemphill and Oliver Lake and tenor saxophonist and clarinetist David Murray.

That led directly to the official founding in 1977 of the World Saxophone Quartet, which subsequently turned out to be a significant musical outlet for all four members, touring and performing at major festivals, concert halls and clubs all over the globe for the next 30 years.

With the WSQ and in other projects, Bluiett pushed the baritone sax beyond previously perceived limits, playing with speed, precision, range, and timbral variation rivaling that usually heard from the best alto and tenor players of his time. In mid-career, he also picked up the clarinet again and began incorporating it into some of his performances.

Further exploring the idea of groups of similar instruments playing together, Bluiett later formed the Bluiett Baritone Nation, made up entirely of baritone saxophones (plus a drummer), and Clarinet Family, a group of eight clarinetists playing clarinets of various sizes.

In all, Bluiett recorded more than 20 albums with the World Saxophone Quartet, plus nearly two dozen as a leader on labels including India Navigation, Black Saint, Soul Note, and Justin Time. He also recorded or performed with drummer Beaver Harris' 360 Degree Music Experience, saxophonist James Carter (a latter-day substitute member of WSQ, who Bluiett considered something of a protege), arranger and pianist Gil Evans, pianist Abdullah Ibrahim, and numerous others.

Beset with back problems and other ailments, Bluiett moved back to Brooklyn in 2002, then returned to New York City in 2012 for several years, until a series of strokes starting in 2014 led him to move back to the Midwest once again a couple of years ago.

Bluiett in 2006 was the subject of a video profile from the KETC program Living St. Louis, which can be seen online here.

On a personal note, I had the chance to interview Hamiet Bluiett a couple of times, once for the short-lived “New Music St. Louis" program on KDHX in the mid-1990s, and again (briefly) for the Riverfront Times in 2006 before the WSQ played at what then was called Jazz at the Bistro. He was an entertaining and informative interview subject, as well as an outstanding musician, and he'll be missed greatly.