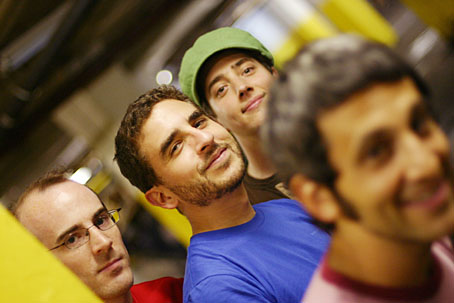 According to Wikipedia, a gutbucket is “a stringed instrument used in American folk music that uses a metal washtub as a resonator." There was even a “gutbucket blues" style of music that was played by those jug bands of long ago. And so since we're here to talk about a band called “Gutbucket," this is a band of hillbillies in overalls sporting a washtub bass, banjo and mouth harp playing mid-20th century Appalachian music, right?

Couldn't be further from the truth.

Gutbucket, around since 1999, plays what I call whack jazz. The punk-art-jazz-rock kind of whack jazz. The name has more to do with their buckets of moxie and the was the music hits you in the gut. Formed at the end of the last millennium, Ty Citerman (guitar), Eric Rockwin (bass), Ken Thomson (woodwinds) and Adam D. Gold (drums), challenge listeners with a fierce abandon but unlike most bands like that, they've got massive chops. This Tuesday comes their second Cuneiform Recordds release and fifth overall, Flock.

Coming just a few months after the release of an album by Thomson's own Slow/Fast band (It Would Be Easier If), it's tempting to draw parallels between the two. Though Slow/Fast adds only a trumpet to Gutbucket's configuration, that extra horn and Thomson's slightly softer approach distinguishes itself from Gutbucket. Not to mention that half the time they player slower numbers. Gutbucket, on the other hand, stands on the gas at some point in every song.

If there's anything light about this band, it's their wit that helps make what is some fairly knotted compositions easier to absorb. Some of the song titles announce their intentions to keep grinning through impossible chord changes: “F*ck You And Your Hipster Tie" sports start-stop whiplash motion, heavy rock riffs and even Rockwin's cello vying for attention. “Zero Is Short For Idiot," begins in a contemplative mood, but builds into a frenzy punctuated by Godwin's rubbery, filthy electric bass getting a good measure of abuse on his solo. “4 9 8" features Thomson and Citerman combining for a serpentine melodic line where Thomson follows Citerman by a half measure, then harmonizes with him, then unites with him. That's the kind of rock that pretty much only jazz guys can play, much less conceive. The interaction is even more maddeningly on “dOg Help Us," as all four are participating on the rhythmically tricky succession of notes. It's math rock amped up a couple of notches.

“Tryst 'n Shout," leans more on the prog rock side, settling into a King Crimson-styled groove where Citerman's acidic rock guitar is balanced out by Thomson's clarinet. “Said The Trapeze To Gravity (Why Are You So Old?)" is some, good baritone sax led hard rockin' fun for the first three and a half minutes. Gold dubbed in a demonic drum solo that along with Citerman's skronking guitar, creates a huge din if just for a few moments. Other songs, like “Sacrificial Vegan" also have quieter moments juxtaposed against crunchier ones; these songs are hardly riff-based, they are as highly composed as some classical pieces but everyone still gets to create in the moment, too.

It's that right balance of composition and improvisation on music that packs a wallop which makes Gutbucket the thinking man's punk rock band of choice. For those looking to wade in a jazz-inclined mosh pit, Flock is a fine place to start.

Gutbucket performs “C'mon It's Just a Dollar" (not on this album):

Recording GUTBUCKET Something Else! AAJ Staff