Guitarist Pete McCann Flexes Jazz-Rock Muscles On "Pay For It On The Other Side," Set For July 20 Release By McCannic Music 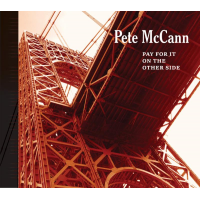 slideshow
Pete McCann’s trademark infusion of post-bop jazz with roots-rock grit and energy reaches a new peak with the guitarist-composer’s July 20 release of Pay for It on the Other Side (McCannic Music). McCann’s sixth album, and his third with the quintet of alto saxophonist John O’Gallagher, pianist/keyboardist Henry Hey, bassist Matt Clohesy, and drummer Mark Ferber, packs a hefty punch that emphasizes the confrontational aspect implied by its name.

“It sounds like an aggressive album title,” McCann acknowledges, noting that on one level, the title refers simply to the toll he pays every morning when he crosses the George Washington Bridge from New Jersey into New York. He adds, though, that if there’s a confrontation at work in the music, it’s one that takes place in the afterlife. “I’m fascinated by the spiritual implications of karma,” he says. “How we treat people and the environment and the consequences of that.”

Far from ethereal, mystical meditations, however, McCann’s ten new compositions are earthy and direct. Tunes like the title track, “Mud Flap,” and “Conventional Wisdom” land with a crunch, loaded with driving rhythms and intense, instantly memorable hooks. Even more tranquil tunes like “Yonder” and “Indemnity,” and jazzier, more overtly complex pieces like the angular swinger “Is April Okay?” and the bluesy, noir-ish “Floor Three” are delivered with an immediacy and command that grabs the listener’s attention from the moment they begin.

The music also carries a strong sense of synergy that McCann attributes to the chemistry at work within the band. “These musicians have the ability to read and play anything I put in front of them, yet also bring their own creativity to the project,” he says. “They have the ability to flesh out what I’m thinking even before I say it.”

He wrote the music on Pay for It on the Other Side with the band members specifically in mind. “I definitely heard John O’Gallagher’s alto voice on all this music,” he says. “Henry has so many ideas for sounds and different instruments. His playing is so unique, walking a fine line between terrific jazz piano, funky clavinet, accordion, organ. He’s like a one-man band. And I love the way Mark and Matt work together. They have an amazing sense of time and feel.”

Pete McCann was born in 1966 in Eau Claire, Wisconsin, and raised there in a bustling farm household. Radio and turntable played sounds of country, rock ’n’ roll, and heavy metal, and thus the pathway to a life in music came into view. Pete’s love affair with the guitar began at age eight, when his mother persuaded the local music store to take him at an early age for lessons.

As a junior high and high school student, he attended Shell Lake Jazz Camp, 80 miles from Eau Claire, for six summers in a row. Master classes in jazz improvisation with teacher Mike Irish and weekly guitar lessons with Russ Moss provided further inspiration. At University of North Texas, he studied with Jack Peterson; during his junior year, he attended a summer program at the Banff Centre in Alberta, studying with Kevin Eubanks.

Arriving in New York shortly after his 1989 graduation, McCann gigged with the East Down Septet, performed with Erwin Vann’s Worlds project, and subbed for Ben Monder in the Maria Schneider Orchestra. He has also worked with Lee Konitz, Brian Blade, and Dave Liebman, as well as the Mahavishnu Project (in which he was endorsed by John McLaughlin himself), Patti Austin, Grace Kelly, and Curtis Stigers.

McCann is also a member of the quartet Spin Cycle, co-led by drummer Scott Neumann, whose ties with the guitarist date back to college days, and saxophonist Tom Christensen. That group debuted in 2016 with Spin Cycle; their 2018 follow-up is Assorted Colors.

Pete McCann and his quintet will perform a CD release concert at the 55 Bar, NYC, on Thursday 7/12 (10pm start, two sets).