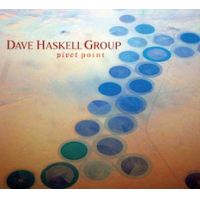 The history of jazz is strewn with brilliant players who have inexplicably eluded widespread recognition, flying under the radar of labels, journalists, and fans. But guitarist Dave Haskell’s stealth status over the past two decades isn’t hard to explain. He’s spent most of that time on the move as a commercial pilot, fulfilling a dream that took root as a child, about the same time he became enamored with the guitar. Before Haskell took to the air as a profession, he was a widely respected improviser at the center of the San Francisco jazz scene, a versatile, blues-drenched player often heard as a sideman and bandleader at high profile venues like Keystone Korner.

Now that he’s hung up his wings, Haskell is once again making waves on the Bay Area scene, working with a superlative band: Pianist Dan Zemelman; bassist Aaron Germain; and supremely tasteful drummer Alan Hall. With his lean, fluid tone, clean attack, and simmering sense of swing, Haskell is back in fighting trim, ready to pick up his music career where he left off back in the mid-1980s. Born into a jazz-loving San Francisco family, Haskell soaked up the sounds of Duke Ellington and Count Basie from the record collection of his father, a doctor. When his father’s medical career took the family to Ukiah, they ended up moving near a small airfield, which sparked Haskell’s lifelong love of flying. He credits the Beatles’ invasion of America with turning him onto the guitar, and by the mid-1960s he was leading a garage band. While initially inspired by the straight ahead artistry of guitarists like Wes Montgomery, Howard Roberts, and Barney Kessel, Haskell fell in with a trio of blues loving brothers, Mark, Patrick, and Robben Ford, who turned him onto the Chicago sound.

“Robben Ford had a bluesy R&B band with horns, and when he took off for the summer to play with his brothers in San Francisco I ended up subbing for him,” Haskell recalls. “When he came back he played alto sax and I took over the guitar chair. Of course, he was still playing guitar with his brothers in Charles Ford Blues Band and he became a role model and mentor for me.”  Working with Robben, Haskell performed in churches, schools, and social halls around Ukiah, and when the Fords relocated to the Bay Area, he used to head down on weekends to hear them play. “I barely finished high school, because I needed to get out of Ukiah,” Haskell says. “I graduated in 1972, and the Fords engineered it so that I came down and joined a blues band.”

After a few years playing blues, Haskell fell in with a succession of exceptional pianists based in the Bay Area, including Larry Vuckovich, Smith Dobson, Larry Dunlap, and New Zealand-born Mike Nock, who featured the guitarist on a gig with his seminal fusion combo The Fourth Way at the Great American Music Hall. While gaining invaluable bandstand experience, he started making a name for himself as one of the hottest young guitarists in the area. When Native American tenor saxophonist Jim Pepper, a jazz/rock fusion pioneer who co-led The Free Spirits, decamped from New York City in 1974, he quickly scooped up Haskell, bringing him to Alaska for a four-month gig the following year. Back in the Bay Area, Haskell started playing with pianist Mark Soskin. When Pepper returned to town, the saxophonist launched a new incarnation of Pepper’s Powwow with Haskell, bassist Ratzo Harris, and pianist Russell Ferrante (who went on to co-found the Yellowjackets). Featuring a singular sound blending rock, post-bop jazz, and Native American influences, the group worked steadily for several years performing up and down the West Coast, with long sojourns in Portland and Alaska.

In 1977 Haskell decided to launch his own combo, the David Haskell Group. Honing a book of intricate, rock-tinged compositions, Haskell attracted several rising young stars, like pianist Susan Muscarella, who was also working with saxophonist Mel Martin’s popular band Listen. When she left, multi-instrumentalist Bruce Williamson, best known these days as a lyrical saxophonist, took over the piano chair. With regular gigs at Keystone Korner and a devoted local following, the DHG signed a contract with Theresa Records and made an album produced by Mark Isham, but it was never released.

When he wasn’t leading his own band, Haskell often worked with keyboardist Jeff Lorber and harmonica ace Mark Ford, his high school buddy from Ukiah. Playing with Ford’s band gave Haskell the opportunity to share stages with blues and R&B institutions like Muddy Waters, Albert King, and Tower of Power. Around the same time, a call from organ star Merl Saunders led to a gig backing soul singer Randy Crawford on the Crusaders’ 1980 national tour. Haskell continued to work with Saunders throughout that year.  A move to Los Angeles opened new doors in 1982, when he and keyboardist Greg Karukas co-founded the band Rush Hour with bassist Jeff Andrews (later replaced by electric bass master Gary Willis), which played leading clubs like the Lighthouse, Donte’s, and At My Place.

By the mid-80s, burned out on the music scene, Haskell decided to parlay his experience as amateur pilot into a full-time profession.   It took years of paying dues and studying to meet extensive licensing requirements, but Haskell eventually achieved his dream, flying internationally for a major U.S. airline. After years of neglecting his musical gift, Haskell bought himself a nylon-string guitar in the late 1990s, and slowly started getting in touch with old musical friends at musicians’ hangs like Jazz at Pearl’s in North Beach. Since retiring as a pilot, he’s devoted himself to jazz again. With his captivating quartet he’s ready for his second act. His new CD Pivot Point — produced by long time friend and world-renowned bassist and producer Jimmy Haslip-—is a major waypoint in his lifetime journey. Indeed a pivotal time of direction and intensity change as Haskell plots his future musical course.