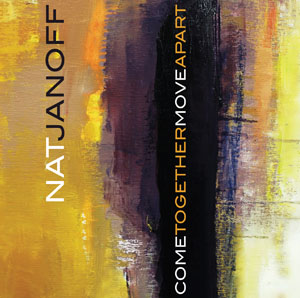 slideshow
Come Together Move Apart is guitarist/composer Nat Janoff's latest release as a band leader. The new recording features John Escreet (piano), Francois Moutin (double bass), and Chris Carroll (drums). Come Together Move Apart is a collection of all new original compositions and effectively melds Janoff's background in traditional jazz with his independent exploration of non-traditional harmonies and improvising. After playing a series of live shows with this band, Janoff decided that these musicians were the ones who could best interpret his compositions. “They are all brilliant musicians" says Janoff, speaking of his band. “They continuously impress me with their talent and I think we all have a great chemistry together." Recorded at Michael Brorby's Acoustic Recording studio in Brooklyn NY in July 2010, Come Together Move Apart took on a life of it's own once the musicians entered the studio. “I planned on using rhodes because that is what I was accustomed to hearing my compositions played on, but that changed in favor of the piano. Once I heard John play these pieces on the piano, I knew that was the way to go."

Come Together Move Apart, for those who are familiar with Janoff's work, wil be surprising. It takes the listener on a journey and will challenge the listener with the duality of consonant and dissonant sounds produced by the powerful playing and improvisational skills of Janoff, Escreet, Moutin and Carroll.