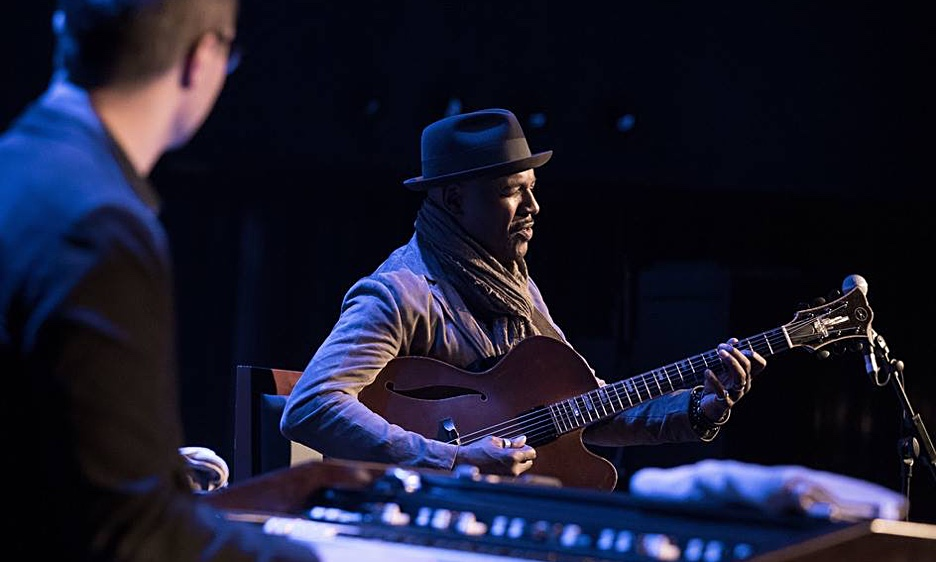 I'm thrilled and honored to assume this position at Northern Illinois University. I'm so pleased by the prospect of continuing my work in musical expression and jazz guitar studies under the auspices and with the support of NIU.
&#151Bobby Broom

Renowned jazz guitarist Bobby Broom has been appointed assistant professor of music in the Northern Illinois University School of Music. He will teach jazz guitar and improvisation in the school’s nationally recognized Jazz Studies Program.

“I’m thrilled and honored to assume this position at Northern Illinois University,” Broom said. “I’m looking forward to sharing with my students, colleagues, and the community all that I’ve gleaned throughout my life and career of making music with many of the 20th century’s jazz masters. I’m so pleased by the prospect of continuing my work in musical expression and jazz guitar studies under the auspices and with the support of NIU.”

Broom holds a Master’s of Music degree in jazz pedagogy from Northwestern University, and has taught at the University of Hartford’s Hartt School of Music, DePaul University, North Park University, and Chicago’s American Conservatory of Music. He conducts clinics, master classes, and lectures nationwide and abroad, is a teaching artist with the Thelonious Monk Institute of Jazz, and has been a Ravinia Jazz Mentor to Chicago Public School students for more than 18 years. Broom has written guest editorial and instructional pieces for national magazines DownBeat, JazzTimes, and Jazziz.

Broom’s latest recording, Soul Fingers (2018), is with his new organ group, the Bobby Broom Organi-Sation, which was the opening act for Steely Dan’s 50-city North American tour in 2014. Produced by the legendary drummer/producer Steve Jordan, the CD is arguably Bobby’s most ambitious to date. Bobby once again revisits the music of his youth, this time employing a wide range of instrumental palettes, in addition to palpable group interplay and his own always soulful and singularly personal guitar sound and style.

For his next album, The Bobby Broom Organi-Sation: Live in America!, Broom will reconvene the band and producer Jordan, featuring the trio in two different stage environments. Half the record will be comprised of concert performances from the opening-act sets of the 2014 Steely Dan tour. The other half will be recorded June 7-8 during the Organi-Sation’s upcoming week (June 6-9) at Chicago’s famed Jazz Showcase. “After hearing the excitement of some of the shows we did opening for Steely Dan,” says Broom, “I was compelled to move in this live album direction. It will present both the more intimate club setting and the power-packed concert environment.”

“We’re pleased to have Steve Jordan with us again to assume production duties,” Broom adds. When asked what it is Jordan likes about working with the group, the drummer replied: “I love it! This is one of my favorite bands in any genre, because of their great musicianship.”

The Organi–Sation recently performed to a live studio audience for a new jazz TV series produced by East Tennessee PBS, the Knoxville Jazz Orchestra, and the Audio Production Engineering department at Pellissippi State Community College. The seven-episode series, called “Live at Lucille’s,” will also feature performances by Christian Sands, Gregory Tardy with Bill Frisell, and guitarist Mark Boling (among others). The debut show, with the Organi-Sation’s performance, will air on East Tennessee PBS on Friday, June 14 at 11pm. For those outside of the viewing area, the entire show will be available online through the PBS Passport app.

Heralded as “one of the most musical guitarists of our times” by author and jazz critic Ted Gioia, Bobby Broom was born on New York City’s Upper West Side and took up guitar at the age of 12. Just five years later, he made his first appearance at Carnegie Hall, playing with Sonny Rollins and Donald Byrd. He relocated to Chicago in the 1980s and has enjoyed a long and distinguished career as a performer and educator.

Broom has spent the new millennium focusing on his musical output as a leader. He has recorded with both his Bobby Broom Trio and the now-disbanded Deep Blue Organ Trio for the Premonition, Delmark, and Origin labels. His The Way I Play was released in 2008 and Plays for Monk in 2009; Deep Blue’s Folk Music came out in 2007, Wonderful! in 2011. Bobby was recognized as one of the top guitarists in DownBeat magazine’s annual Readers’ Poll (2015) as well as their Critics’ Poll (2012–2014 and 2017). His ongoing work with the Organi-Sation is but the latest chapter in his extraordinary jazz career.