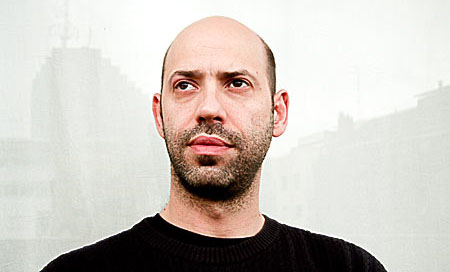 slideshow
Tomorrow, Sunnyside will release Guillermo Klein's latest album, Domador de Huellas, an inventive and powerful take on the music of the Argentine folklore legend Cuchi Leguizamón. The early reviews are stellar. The Times' Ben Ratliff lauds the way Klein transforms Cuchi's music while retaining its essence. NPR's Patrick Jarenwattananon analyzes Klein's entrancing introduction to “Coplas del Regreso" and admits that, like me, he's been listening to the album on repeat for the last week.

For the next day, you can hear the entire album streaming on NPR's website. Then you can buy your very own copy. I can't recommend it highly enough.

But, wait, there's more—much more. Last December, I traveled to Buenos Aires and conducted lengthy interviews with Guillermo, Richard Nant, Pipi Piazzolla, Fer Isella, and Esteban Sehinkman, all part of the Domador de Huellas team. (Richard plays trumpet and bombo, Pipi is the drummer, Esteban plays keyboards, and Fer is one of the producers.) This material will be part of my forthcoming radio documentary, “Sounds of Upheaval: Guillermo Klein and the new Argentine jazz." The doc will be released on next week's installment of Josh Jackson's The Checkout (Tuesday, 8/17 at 6:30 p.m., 88.3 on the FM dial), which just so happens to be the night that Guillermo, Richard, and Pipi open their run at the Village Vanguard.

On the same day that my Checkout show premieres, I'm going to be releasing a veritable encyclopedia of Argentine jazz on this very blog. Interviews with Pipi Piazzolla, Richard Nant, Juan Cruz de Urquiza, Esteban Sehinkman, Fer Isella, Lucas and Seca Cutaia, and Guillermo Klein (and possibly more) will form the backbone of the project. I'm busy putting all of this together. It's going to be a multimedia extravaganza (words and sounds and sights, oh my!) and should feel like the Criterion Collection Disc 2 (the making-of docs, interviews, outtakes, etc) to my Checkout show's Disc 1.

For now, I leave you with a recording from my afternoon with Guillermo Klein at his house in the Buenos Aires neighorhood of Nuñez. He was playing a mash-up of Cuchi Leguizamón and Duke Ellington on his upright piano, and a very unskilled radio engineer managed to capture a few minutes of it in mono: Klein Plays Cuchi.