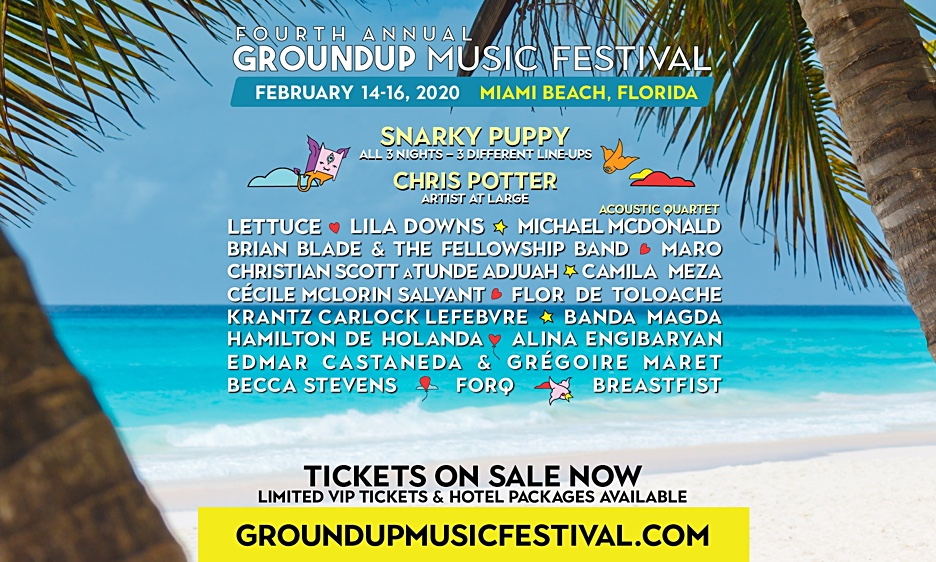 Acclaimed by the New York Times as one of the “Top 10 Definitive Moments of the Decade in Jazz Music,” the GroundUP Music Festival returns to the oceanside North Beach Bandshell in sunny Miami Beach, Florida, February 14-16, 2020.

Hosted by three-time Grammy award-winning collective Snarky Puppy, GroundUP has announced the schedule for their intimate cocktails and brunches with the artists including a rare Snarky Puppy acoustic set, an unplugged collaboration between female powerhouses Lila Downs and Mariachi Flor de Toloache, and a special performance that brings together Cecile McLorin Salvant with Christian Scott aTunde Adjuah, Chris Potter and Larnell Lewis.

GroundUP goes beyond the typical festival experience, breaking down the barriers between audience and artists with master classes, workshops and personal interactions with the artists including a Songwriting Interview with Michael McDonald from The The Doobie Brothers and Steely Dan, Samba School hosted by MiamiBloco, a Percussion Summit with Adam Deitch and A Capella by the Sea experience with Magda Giannikou, among many others.

Named “one of the 10 best music events” by Miami New Times, GroundUP has a massive international appeal with 60% of attendees coming from 48 states and 54 countries around the world. The festival is artist-centric and attendee-focused, with a limited daily capacity of approximately 2,000 guests, no overlapping sets, and great acoustics in a small outdoor theater on the beach where the audience always has plenty of space and unobstructed views. Fans can swing in hammocks and bask in 78 degree weather while enjoying food and libations from Locavore—Taste of Redland in a family-friendly environment.

Snarky Puppy, hailed by Rolling Stone Magazine as “one of the most versatile bands on the planet,” will play daily sets, along with a stellar lineup of artists from Colombia, Portugal, Brazil, Chile, Cuba, Switzerland, and Greece, making it a true exploration of world music.

GA tickets, VIP packages and hotel accommodations. A limited number of cocktail and brunch performance tickets are on sale now but they will sell out. Cocktails and Brunches with the Artists & Private Performances.