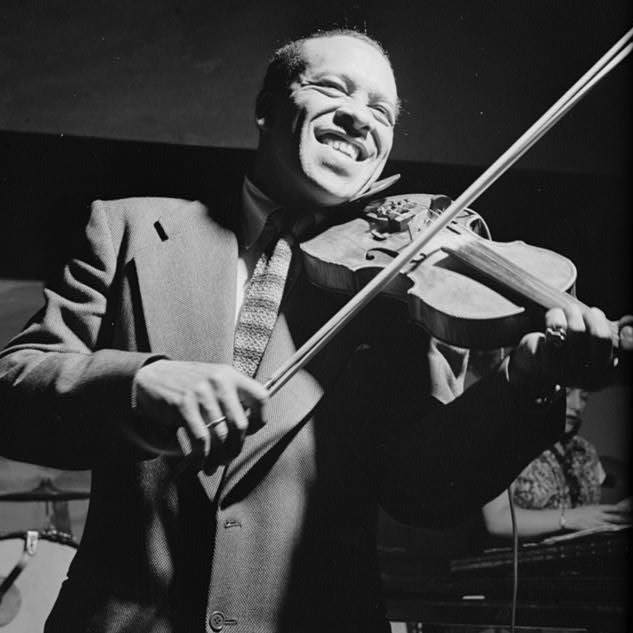 slideshow
Stuff Smith, born on this date in 1909, was one of the three great pre-bop jazz violinists (along with Joe Venuti and Stephane Grappelli). In an era when the violin was considered a bit old-fashioned sounding for jazz, Smith's playing was more raw and rhythmic, using a more Texas blues feel to knock any whiff of stale classicism out of his violin.

Born Hezekiah Leroy Gordon Smith in Portsmouth, Ohio, Stuff's father encouraged him to play classical violin, but he became a lifelong jazz devotee after hearing Louis Armstrong play—not an unusual occurrence in those days. In the mid-1920s, he joined a Dallas-based band that played jazz in a bluesy, free-form style. Stuff also played briefly with Jelly Roll Morton. In 1930, he formed his own group in Buffalo and then moved to New York City a few years later.

Stuff Smith and His Onyx Club Boys, including drummer “Cozy" Cole, became a fixture at the Onyx Club on 52nd Street for several years. Smith performed in what became his signature get-up: an old top hat, sometimes with a parrot perched on his shoulder. He also was a pioneer in the use of an amplified violin. He developed a distinctive sound, a more aggressive and bluesy approach than the swing-inflected style of other violinists.

In the 1940s, his career stagnated somewhat and his health suffered from years of heavy alcohol use. But in the late 1950s and early 1960s, Smith experienced a revival, recording several albums—including Have Violin, Will Swing (Verve Records, 1957); Cat on a Hot Fiddle (Verve, 1959); and Swingin' Stuff (a recording of a live set with Kenny Drew on piano, Niels-Henning Orsted Pedersen on bass, and Alex Riel on drums) - and touring in Europe up until his death in 1967. (His nickname, by the way, apparently came from his habit of referring to people whose names he'd forgotten as “Stuff.") He is aptly remembered as “the cat that took the apron-strings off the fiddle."

This story appears courtesy of Riffs on Jazz by John Anderson.
Copyright © 2021. All rights reserved.