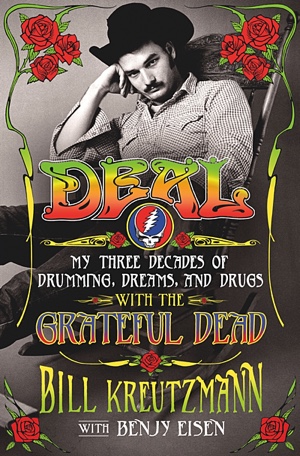 slideshow
DEAL: MY THREE DECADES OF DRUMMING, DREAMS AND DRUGS WITH THE GRATEFUL DEAD SET TO COME OUT MAY 5

The Grateful Dead are perhaps the most legendary American rock band of all time. For 30 years, beginning in the San Francisco hippie scene in 1965, they were a musical institution, the original jam band that broke new ground in so many ways. From the music to their live concert sound systems and recordings, they were forward-thinking champions of artistic control and outlaw artists who marched to the beat of their own drums.

Now, in his upcoming memoir DEAL: My Three Decades of Drumming, Dreams, and Drugs with the Grateful Dead (St. Martin's Press; on-sale May 5, 2015; $27.99), Bill Kreutzmann&#151a founding member and drummer for every one of their over 2,300 concerts-has written an unflinching and wild account of playing in the greatest improvisational band of all time. Everything a rock music fan would expect is here, but what sets this apart is Kreutzmann's incredible life of adventure that was at the heart of the Grateful Dead experience. This was a band that knew no limits and he lived life to the fullest, pushing the boundaries of drugs, drums and high times, through devastating tragedy and remarkable triumph.