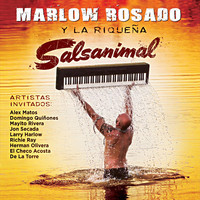 The best music is that which reaches beyond its original genre. It can move people deeply, even when the composer and listener are separated by oceans. Such a work is the latest release by Marlow Rosado , “Salsanimal.”

With over two decades' experience in the music industry, Grammy- winning pianist, composer, and producer Marlow Rosado has developed a powerful portfolio working with many of the top artists in the Latin recording industry. From salsa to rock, from merengue to hip-hop, from bachata to reggaeton, producer, composer, and pianist Marlow Rosado has had his musical hand in all of it. He is continually sought out by Latin Artists for his musical arrangement skills, his aggressive montunos on the piano, as well as his ability to direct orchestras for artists such as the late Salsa legend Celia Cruz, Tito Puente, Jr., Tito Nieves, and many others. It is not uncommon to see Marlow’s name on CD liner notes, whether it is as a pianist, producer, songwriter or musical director.

After his extremely successful second album, “Retro," which won a Grammy for best tropical album of 2013, Rosado is set to release album number three, “Salsanimal,” which he produced, wrote, and arranged. It's power-packed with 12 original hard-driving salsa arrangements featuring nine invited artists, each interpreting a song tailor-made for him.

Legendary salsa pianists Larry Harlow and Richie Ray join Marlow in a friendly piano solo battle among the three virtuoso salsa pianists. Harlow, founder of Latin Legends of Fania, holds a Latin Grammy Lifetime Achievement Award. And Ray, “El Embajador del Piano,” best known for the duo Richie Ray and Bobby Cruz (“the kings of salsa”), is still considered one of the best and more influential pianists of all times in salsa music. The veteran salsa singer Herman Olivera interprets Rosado's “Cataño”, a song written as a love letter to Marlow's home town in Puerto Rico. This dynamic sonero is currently the lead singer of the Eddie Palmieri Orchestra, where he is featured on five CD's with the nine-time Grammy-winner and master pianist, including “Masterpiece/Obra Maestra" with the late, great Tito Puente, which garnered two Grammys. Mayito Rivera, lead singer for Cuba's legendary group “Los Van Van" for over twenty years, and one of Cuba’s most notable singers, takes on “Así Son" another composition by Rosado.

Other artists on the CD are Jon Secada, Domingo Quiñones, Alex Matos, Checo Acosta, and newcomer De La Torre. The world- renowned Secada has won two Grammys and sold some 20 million albums. Singer/actor Domingo Quiñones performed on Tito Puente's 100th album, and demonstrated his acting abilities in the rock opera Jesus Christ Superstar. Alex Matos, known as “el salsero de ahora,” is a winner of the Casandra Award of the Dominican Republic for his singing. Checo Acosta holds two Latin Grammy nominations; he is one of the leading exponents of Colombian carnival music, specifically folk styles native to the country's Caribbean coast such as cumbia and vallenato.

Salsanimal will be released on CD, digitally and as an LP. The attention to detail is impressive. Everything: the mix, the mastering, and the artwork, is just exquisite and refreshing. Signed to Fania Records and with one Grammy already on his shelf, Marlow Rosado is most definitely a driving force of the tropical music industry who can look forward to still greater recognition.