Maximize your visibility at All About Jazz by upgrading your musician page from standard to premium. With it, you'll receive All About Jazz home page exposure, a highly stylized / ad-free musician page with bonus features and benefits, an ad, plus you control where you sell your music and so much more.
Learn More
55 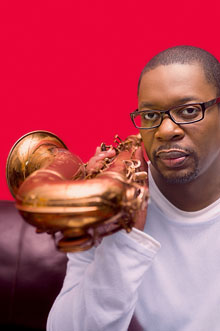 slideshow
Philadelphia, PA—Touted as “amazing, deep, soulful, masterful" by Jazz Police, prodigious saxophonist Ravi Coltrane takes the stage with his quintet on January 14 at the Annenberg Center as a part of its Jazz Series. In a one-night-only treat just in time to kick that holiday hangover, jazz enthusiasts and newbies alike can delight in Coltrane's robust and distinctive saxophone sound. The performance will take place in the Zellerbach Theatre on January 14, 2012 at 8 PM. Tickets start at $20. For tickets or for more information, please visit AnnenbergCenter.org or call 215.898.3900. Tickets can also be purchased in person at the Annenberg Center Box Office.

Since 1991, Coltrane has diligently forged a prominent and highly-acclaimed career as a live performer, recording artist and producer. Says Coltrane of his distinct yet effortless sound, “I want to be involved with music that is truly honest—that's not trying to follow trends or fit into someone's idea about what jazz 'is.'"

2009 marked the release of Coltrane's highly anticipated Blending Times, his follow-up to the Grammy®-nominated In Flux. On Blending Times, Coltrane and his group solidify his standing as one of today's most innovative jazz artists and improvisers. The recording is a stunning set of musically diverse, rhythmically eclectic pieces capturing the fluidity of the group's spontaneous improvisations and familiar jazz dialogue.

Come early for a pre-show chat at 7 PM with Ravi Coltrane hosted by WRTI's Maureen Malloy.