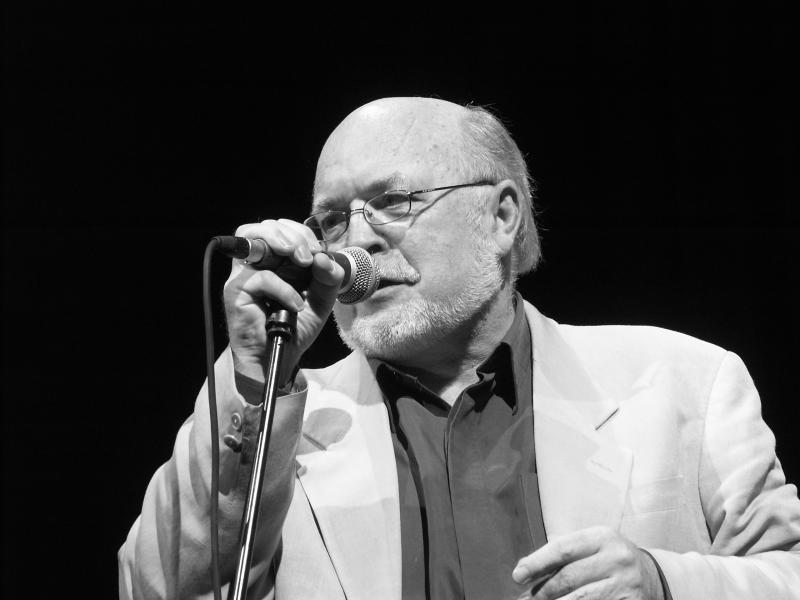 Composer, bassist and bandleader Graham Collier left town on Friday, September 9,, 2011. He was holidaying with his partner, John, in Crete, when a sudden heart failure took his final breath. It was quick, relatively painless but unexpected. We all felt sure Graham had too much sparkle, too much music in him to go so soon.

His career, indeed his life, was shaped by music. Collier grew up in Luton, Bedfordshire—reason enough to leave home at 16 to join the army and become a band boy. In his early twenties, he won a scholarship to Berklee School becoming its first British graduate in 1963. His fellow students at the time included Rhodesian-born trombonist Mike Gibbs and a precocious vibraphonist by the name of Gary Burton, while the school's Herb Pomeroy was an important early influence.

Collier remained in the States post-graduation but suffered injury in a car crash whilst on tour in Wyoming with the Tommy Dorsey ghost band. Returning to Britain in the mid-sixties, Collier formed his own band and by the early seventies had released a handful of records that remain amongst the finest examples of small group jazz. Songs For My Father, with Alan Skidmore on tenor and Phil Lee on guitar, comes highly recommended, but Mosaics is even greater, revealing an approach to composition and performance that Graham would continue to develop and refine for the rest of his life.

Reissued recently by BGO records, these albums reveal a rare talent able to fuse a British pastoral compositional sensibility with something far more rambunctiously funky that stemmed from an admiration for Charles Mingus. Even more importantly, BGO included amongst the reissues an alternative and very different recording of Mosaics, as well as a stereo version of Deep Dark Blue Centre. The first two BGO sets are indispensable, while the third is perhaps merely necessary.

In 1968, Collier was the first jazz composer to receive an Arts Council grant and the music that resulted, Workpoints, was astonishingly good. Sadly, it took 37 years to see its eventual release thanks to the US Cuneiform label. Hoarded Dreams, another big band set, was even better. That took a mere 24 years to see the light of day. Yet both albums sat perfectly with a series of large ensemble albums that Collier had released in the late nineties and early noughties. If I had to select one from that fine bunch it would be Bread and Circuses, with the Australian band, The Collective. Yet it is fitting somehow that Graham's other late career masterpiece, Directing 14 Jackson Pollocks, would be the last record he would issue during his life. It simply brims with vitality, good humor and humanity.

Many of the players who worked with Collier stayed with him for many years, evidence of a remarkable loyalty borne of mutual respect. Collier was always there for trumpeter Harry Beckett, and Beckett was always there for Collier. The same was true of drummers John Webber and John Marshall, saxophonist Art Themen and guitarist Ed Speight. In fact, Collier's approach to his music required such loyalty and continuity. Two of his oft-used phrases suggest something of the demands of his music on his band—"moving music off the paper" and “jazz happens in real time once." He elaborated his ideas quite magnificently in The Jazz Composer, published in 2009 by Northway. At risk of over-simplification, Collier's aim was the development of a performance practice that allowed the composer/conductor to determine live who soloed or even at which point themes, melodies or events might occur. This is illustrated beautifully with the BGO records of Mosaics and The Alternate Mosaics. The same piece of written music was played twice on the same evening by the same players. Yet to the unaware, unprepared ear this is barely apparent let alone obvious.

There was an integrity to Graham Collier that came out in everything he did. In 2001, I reviewed a series of reissues of his mid-seventies and eighties recordings and, to be honest, was rather lukewarm in some of my comments. A couple of years later, I wrote about three big band releases—Winter Oranges, Charles River Fragments and The Third Colour—with much more enthusiasm. An extract from the review appeared on Collier's website to the effect that though not normally a fan, I had been genuinely impressed. I met Collier for the first time a little later to interview him for Jazz UK. I mentioned this and said, I hoped I had not been misunderstood, that I was a fan but felt some of his mid-period records seemed unfinished. As far as Collier was concerned, I had done my job as a critic, said what I thought and why I thought it. There was no animosity and no hint of resentment. Reasoned critique was one thing, gratuitous comment another altogether.

Collier had actually included critics comments in the inner sleeves of CD reissues, both favorable and negative. It amused him to do so. One comment likened him to a “poor man's Stan Kenton.'" He was less sanguine about that remark and told me that the writer had made an approach to interview him for a book that was in preparation. Collier turned down the request saying “life is too short" and he had “plenty of better things" to spend his time upon.

Being gay was, of course, a significant part of him but, in a way, just one aspect of the very cultured, sensitive and broad-minded individual that he was. It didn't define who he was any more than being a bassist defined him as a musician. I asked, once, whether he had ever encountered prejudice within the scene. There was one famous instance, which spoke volumes about the emotional immaturity of the writer involved but otherwise he felt it was not ever a problem. As a bandleader he hired people whose playing and “vibe'" he liked and, as he told me, if he had suspected any strong anti-feminist or gay vibe, “they wouldn't have been there in the first place."

Collier gave gladly of his music and of his time. He was a committed educator and was there early in the life of NYJO donating the tune “Gay Talk," amongst others, was instrumental in the formation of Loose Tubes and in 1986 launched the jazz course at the Royal Academy of music. There are many RAM students who would concur with pianist Peter James, who commented to me that “Graham's open ethos created an invaluable environment for students to develop their own musical voices." That too is a mark of the man. But most of us will hold on to his music&#151by any standards a most remarkable epitaph.

Our thoughts and condolences go to writer John Gill, Collier's partner of 35 years.