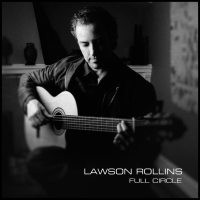 San Francisco, CA: Having traversed the world in search of intriguing sounds from virtually every corner of the globe with his beloved Spanish guitar en tow, Lawson Rollins has come full circle on his aptly titled fourth solo album, “Full Circle,” which will be released July 16th by his Infinita Records. Adopting a “less can be more” philosophy on the twelve new songs that he composed allows the focus to be on Rollins’ captivating melodies and dexterous fretwork that unfold over worldbeat rhythms and multicultural instrumentation. Radio listeners will be introduced to the collection Rollins produced with multi-platinum producer Dominic Camardella (Ottmar Liebert, Flora Purim, 3rd Force) when the first single, “Momentum,” is shipped to stations in June.

Just as he has on his previous releases, Rollins entered the recording studio with Camardella (keyboards, piano) and a gifted ensemble comprised of Grammy-winning violinist Charlie Bisharat, bassist Randy Tico, percussionist Dave Bryant and saxophonist/flutist Richard Hardy. Rollins plays classical, flamenco and electric guitars on “Full Circle” along with keyboards and drum programming. The multilingual etchings of the erudite guitarist fluctuate in tone and speed. Rooting the compositions in sparser settings than utilized on his earlier albums (“Elevation,” “Espirito” and “Infinita”), the storytelling guitarist spins enthralling escapades with his six-string that are the focal point of the sonicscapes. Rollins relishes the challenge of presenting material masterfully performed as audacious amalgams constructed of mesmerizing melodies and exotic rhythms mined from Afro-Cuban rumba, bossa nova, samba, mystical Middle Eastern, tango, reggae, rock, classical and jazz.

Each cut was thoughtfully crafted resulting in numerous highlights on the disc. “Momentum” rides a relentless rumba-flavored groove seasoned with a hint of Japanese folk music along a marching motion of melody. The rumba party continues on “Pursuit,” which incorporates an Appalachian fiddle motif to the thrilling chase. “Flight” and “Bloom” romance by way of sultry bossa nova ambiances and a pristine nylon guitar sound. The title cut recalls Rollins earlier work as a member of Young & Rollins (2000-2006) with an updated approach to the salsa stylings. “Gone From Here” is a sprawling rumba meets rock stroll on which Rollins makes a rare pronouncement on electric guitar. Another diverse number that Rollins refers to as a “journey piece” because of its deviation from the typical song structure, “Shifting Seasons” is like 4 songs in one song that melds folk, Asian elements, rumba and bolero rhythms.

“’Full Circle’ is somewhat of a return to my roots in a sense, with the focus shifting to a sound that is more centered and grounded in the instrument I know best - the nylon string Spanish guitar. I was determined and indeed excited to create a cohesive, guitar-focused album. I had to reign in my instinct to apply layer upon layer of sound to any given track. That's not to say that ‘Full Circle’ does not have some adventurous musical rides, but the heart of the album can be found in concise musical statements. Woven throughout the fabric of the recordings is the constant thread of the guitar. ‘Full Circle’ is perhaps the most accurate, pointed expression of my guitar style and approach to melody and songcraft to date,” said the San Francisco-based Rollins.

Rollins has generated over 7.5 million YouTube views, an extraordinarily high number for an instrumentalist in his genre. Over 6 million views came from the release of three astonishing performance clips – “The Fire Cadenza,” “Santa Ana Wind” and “Locomotion” – with the balance comprised of fans posting videos of their own attempts to replicate his astoundingly prodigious techniques. Rollins scored a #1 radio single at Billboard with “Moonlight Samba” from the “Espirito” album in addition to collecting several Top 30 contemporary jazz radio hits. Last year, he guest hosted a national radio program on Sirius XM and was profiled in Guitar Player magazine, which marveled “He possesses ungodly classical chops, with dazzling speed, uncanny accuracy, and a beautifully delicate touch.”