The young bassist Giuseppe Millaci, while pursuing an intense activity as a sideman, introduces today his first project as a leader, the Vogue Trio. 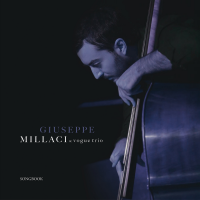 Born in Sicily, Giuseppe Millaci is a young jazz musician and composer with a portfolio of distinguished credentials.

After relocating to Belgium as a teenager, Millaci began playing double bass and was influenced by jazz luminaries such as Ray Brown, Dave Holland and Marc Johnson. In 2007, he was accepted at the Royal Conservatory of Brussels and trained under the guidance of maestro Jean-Louis Rassinfosse. In 2011, he won the Erasmus Scholarship and attended the Maastricht Academy of Music, graduating in 2013 with a Masters degree (distinction). A regular performer at prominent jazz clubs and festivals, Millaci was inspired by the talents of French pianist Amaury Faye and Belgian drummer Lionel Beuvens. The three musicians united to form the Vogue Trio; a project which is on the precipice of releasing its first complete body of work.

The debut album from Giuseppe Millaci & Vogue Trio is titled Songbook, featuring original jazz compositions which immerse the listener in a beautifully abstract, yet accessible musical landscape. The dynamic range and intricacy of the release is performed with sincerity and charm, effortlessly traversing genres including classical, blues and pop based jazz.

Songbook by Giuseppe Millaci & Vogue Trio is released through Hypnote Records on 29 September, 2017.

The band will be embarking on an international tour in support of the release, commencing in November, 2017.