The rhythmically surging 11-track set should find instant favor with a diverse universe of fans, new and old. The program’s unpretentious character, personified by the leader’s heartfelt vocals and such plaintive themes... underscores the session’s warmth and its irresistible appeal.
—Mark Holston, Latino Magazine 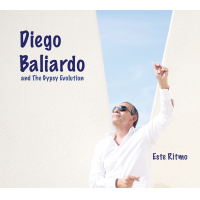 Diego Baliardo, one of the founders of the world-famous Gipsy Kings, is carrying on the group’s tradition of playing their unique blend of musical styles with a new generation of musicians steeped in Romani culture. Baliardo is releasing Este Ritmo (This Rhythm), the debut release with his new group, The Gypsy Evolution (March 19, 2021, Moondo Records).

The Gipsy Kings were formed in 1987 by two sets of brothers from the Baliardo and Reyes families, Spanish Romani who fled to France during the 1930s Spanish Civil War. The roots of the band go back to 1979 when Nicolas Reyes and Tonino Baliardo began travelling and making music throughout France. Like their forebears, who were known for their peripatetic lifestyle, the two musicians travelled constantly, playing where they could, busking on the streets of Cannes and playing for weddings, parties, and festivals. They eventually adopted the name Gipsy Kings as a fitting homage to their ancestry.

Since then, the Grammy-winning Gipsy Kings have performed all around the world, selling over 20 million albums in their 35-year career, making them the biggest selling musical group to come out of France. The band blends traditional flamenco styles with Western pop and Latin rhythms as well as elements of Arabic music, reggae, and jazz guitar reminiscent of the French Gypsy master Django Reinhardt. The Gipsy Kings’ eponymous debut album was released in the United States in 1989 and ended up spending 40 weeks on the charts. It is one of few Spanish-language albums to enjoy such success.

Over the years, the band went through various personnel changes, with the Baliardo and Reyes families at its core. Diego Baliardo toured with the group, playing rhythm guitar and singing background vocals. Today he fronts his new band that plays the distinctive music that made the original group so successful.

The Gypsy Evolution is made up of members of the Baliardo family and friends. Marlon Baliardo and Gibson Baliardo are brothers and Diego’s grandsons. They play guitar and sing back-up vocals. Gibson also plays piano. Antoine Ona, a friend of Gibson’s, plays bass, while Pacheco Rodolfo is a percussionist who has often performed with Diego.

It is hard to sit still listening to the music on Este Ritmo. The polyrhythmic styles are infectious and have a joie de vivre that makes you want to get up and dance, as so many fans do at their live performances. The music is highly textured with three guitars and a mix of percussive instruments, like congas, shakers, timbales, tambourines, triangles, and guiros, that add sudden pops of color that keep each tune fresh and interesting.

Fronting all this happy music is Diego Baliardo’s expressive and plaintive vocals and energetic rhythm guitar. Baliardo, who wrote and arranged all the music for this project, says, “Music is central to the gypsy way of life and heritage. We have picked up musical styles from all the cultures we’ve interacted with and blended them with our own culture, creating our unique style. Music is in my blood. I can’t imagine not playing music. Though at my age now, I think my music is a little mellower than it has been in the past. And although I still enjoy performing before an audience, I’m also enjoying spending more time in the studio and not travelling as much.”

The moods of the songs on Este Ritmo range from tongue-in-cheek, like on “No Tengo Dinero” (I Don’t Have Money), to wistful, like “Mi Niño” (My Child), to romantic, like “Cara Bonita” (Pretty Face). Yet each is firmly rooted in the flamenco with other Latin influences and a distinct pop flair. Diego Baliardo is the rare kind of musician who can bridge both diverse musical cultures and different generations, all in the service of keeping the music original and engaging while preserving a proud heritage that is over 1,000 years old.

Este Ritmo will be available on March 19, 2021 on Moondo Records.