Gipsy Kings at the Conga Room 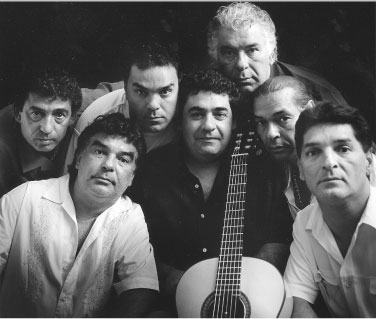 Culturally speaking, we're all turning into global nomads. We roam far and wide through the alchemy of cinema, TV and, if we're feeling really ambitious, foreign literature. We wander to the ends of our iTunes Genius recommendations in search of exotic new sonic encounters.

So it was fitting that the newly reconstituted Conga Room, one of L.A.'s most restlessly cosmopolitan nightspots, decided to usher in 2009 with back-to-back bookings of the Gipsy Kings, those itinerant missionaries of Rumba Catalana.

Drawing inspiration from a centuries-long musical diaspora, this band made up of two interlocking clans of French-born children of Spanish Republican exiles plays a virtuosic style of Asian-influenced pop-flamenco (with occasional reggae inflections) that has made their oeuvre as recognizable in Beirut as it is in Barcelona. Bob Marley made a masterpiece of a record titled “Exodus"; the Gipsy Kings have made an entire career out of their own up-tempo, secular hijra(Islam).

Wandering a rhythmic and harmonic trade route stretching from India to the Caribbean, the Gipsy Kings are a great party band, as was attested by the mounds of confetti, crepe paper tiaras and Champagne flutes strewn across the Conga Room's VIP lounges and cocktail tables on New Year's Eve.

But they're also the rare good-time ensemble whose technical proficiency must be treated with utmost respect. Watching the deft-fingered Reyes and Baliardo kinsmen strum their acoustic guitars en masse is, at times, like beholding a rampaging herd of Andalusian horses. There's an elegant but unbridled joy in their playing, a noble bearing in the way they command a concert stage.

And pure ecstasy reigns whenever lead vocalist Nicolas Reyes launches into one of his trance-inducing devotional arias, sounding for all the world like a Sufi mystic, even though the love he's professing is generally as much of the profane as the sacred variety.